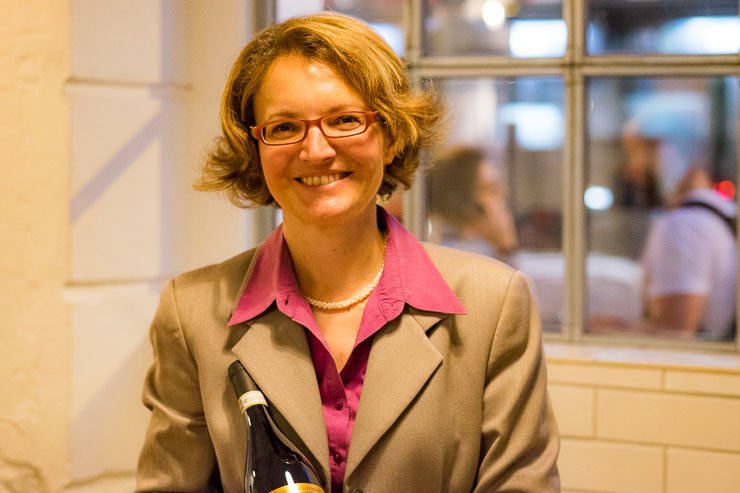 21 Sep Lifting the fog on Nebbiolo: ArPePe at Lyle’s

If I were a grape variety, I’d be a Nebbiolo: I’m rampant, I need patience & I’m slow to mature … but I’m worth the wait. Or at least I think so. To find out more about the ‘alpine’ Nebbiolo wines from Italy’s northern Valtellina valley, I went along last week to the ArPePe Dinner at Lyle’s.

Isabella Pelizzatti Perego was in town to personally introduce us to her ArPePe wines. She works alongside her brothers Emanuele and Guido as 5th generation wine producers.

ArPePe is based in Sondrio, close to the Italian border with Switzerland.  I know Sondrio as it’s on the way to the ski resort of Bormio, where I went a couple of times before it got very popular after the Winter Olympics in Turin in 2006.

I remember the steep terraces, the vines, the hilltop churches, and the apple orchards stretching along the narrow valley… I also remember catching the fast train to Torino (Turin) from Milan, rather than to Tirano in the Valtellina valley. We got to the ski slopes of Bormio eventually

After a day’s skiing, we would fill ourselves up with the classic local dish of pizzoccheri, a type of short buckwheat tagliatelle cooked with swiss chard, cubed potatoes and the local casera cow’s milk cheese.

This famous Italian grape variety does not like to grow outside Italy. Personally, I can understand why.

Most people associate Nebbiolo with the Piedmont region, with Barolo and Barbaresco, near the truffle town of Alba.

ArPePe’s Valtellina wines, where Nebbiolo is also called Chiavennasca, have a distinct, ‘alpine’ taste: fresh, mineral, salty, & more meaty than a Barolo…  perfect for the cheese and game-based dishes of the region. Isabella believes that Nebbiolo originates from Valtellina, rather than from Piedmont, given its similarity with plants autochthonous to the valley.

In Valtellina, the grapes are grown on steep terraces with stone-retaining walls called muretti. This means that everything needs to be done by hand. Together with the capricious alpine weather and a grape variety that needs ‘patience’, producing wine in Valtellina is not for the faint-hearted. That explains why at the beginning of the 20th century 3,000 hectares (7,400 acres) were under vines in the valley and now a mere 800h (less than 2,000 acres).

At ArPePe, the vines are grown on south and south-west facing slopes between 300 and 600m, overlooking the river Adda. The Huffington Post calls the region: “One of the most dramatic vineyard landscapes in the world“, likening it to Portugal’s Douro.

The soils are sandy with large stones, fragmented rock, which absorb the heat during the day and release it at night, like the galets in Châteauneuf-du-Pape.

The harvest often takes place in late October, with the wines then aged in toasted chestnut or acacia barrels, made from local wood.

Lyle’s Head Chef, James Lowe, put together a tasting menu for the ArPePe Dinner matched with wines chosen by Isabella. A powerful duo.

With each course the wines got better & better.

We started with 3 taster-sized dishes.

Raw Dexter Rib served on smoked roe-spread toast – made for eating with your fingers, just like the … Sweetcorn, rubbed with lemon thyme and honey … I’ll be trying that at home.

Lamb’s Heart, with a reduced redcurrant sauce and onions. I had had my first ‘heart’ experience at Sager & Wilde. Now, give me heart any day, so succulent and tender is the meat.

Accompanying wine: ArPePe, Rosso di Valtellina 2014 – an ‘entry’ level wine, from vines up to 50 years old and grapes picked from the lower terraces.

Beefsteak Mushroom & Cotswold White Egg, with toasted grains of buckwheat … the local buckwheat had to get in there somewhere!

Wine: ArPePe, Sassella Riserva Stella Retica 2011 – Sassella, which in the local dialect means ‘rock’, is the most prestigious of the Valtellina wine districts.

Wine: ArPePe, Sassella Riserva Rocce Rosse 2005 – from a single plot of red grantite near the top of Sassella.

I have often wondered why there is not a strong mushroom-picking tradition in Britain. One theory is that modern cultures rooted in Celtic traditions tend not to eat mushrooms. I picked up this theory in Spain, where they do a lot of hunting for seasonal mushrooms. Could it be that all mushrooms became frowned upon given that the Celts liked their psychotropic mushrooms? I would love to know.

The Federia cheese had a nutty, alpine taste with a hint of Cheshire. That’s because Cheshire is where this cheese is made, by Anne Connolly, who spent 17 years as a chef in Italy and learnt cheese making from local artisans in Valtellina.

Wine: ArPePe, Sassella Riserva Ultimi Raggi 2007 – from around 600 metres, the highest part of Sassella, with the harvest late and the overripe grapes allowed to dry on the vines. Perfect for cheese.

The Federia, honey & cobnuts was followed by Brown butter & lemon thyme biscuit with fig leaf ice cream. Ah, ah, I have a fig tree in my garden (originally a seedling from a craggy cliff near Rome) … this could be my new homegrown garden ‘crop’.

Where to find ArPePe & Sondrio in Italy