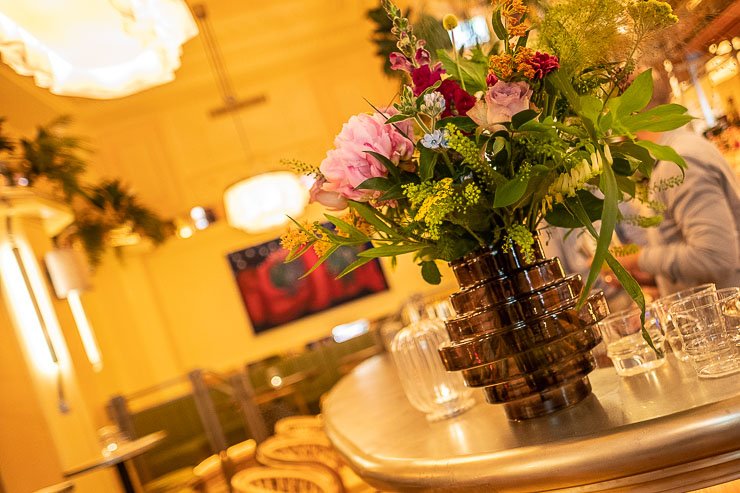 22 May Bloomsbury set: Neptune + a hotel with a Titanic story (WC1)

My astrological chart shows up a lot of watery, creative Neptune. I’m a lover of oceans, seafood and natural wine. Neptune Restaurant was calling me, from the depths of the historic literary and bohemian district of Bloomsbury.

Neptune is the creation of Australian-born chef Brett Redman and stylist-turned-foodie Margaret Crow, hailing originally from Texas. I visited the restaurant a few days before the official opening on 24 May 2018.

[UPDATE July 2021: The Principal has now become the Kimpton Fitzroy. The sparkle that came with Neptune London as the hotel’s dining area seems to have been washed away and the gates closed… what a shame. Hopefully Brett Redman and Margaret Crow will pop up somewhere else soon.}

Brett and Margaret used to run The Richmond gastropub in Dalston, famous for oysters, cocktails and lock-ins – when the doors are closed and the party continues. Like the famed Bloomsbury Set, Margaret and Brett are far from having bourgeois habits, or so it appears.

Neptune – part of The Principal

Neptune the restaurant is part of The Principal Hotel. To get there, you have a choice: either to take the scenic route via the hotel’s magnificent main entrance, and to marvel at the eclectic mix of design inspired by Italianate, Dutch Colonial Revival and French Renaissance styles, or take the discrete, almost illicit-feeling side entrance route via Guilford Street.

The newly refurbished hotel opened originally as the Hotel Russell in 1898.  Charles Fitzroy Doll designed the building. He also designed, in a very similar style, the dining room of the Titanic.

The hotel has faired better than the ship. On the staircase on the first floor of The Principal sits George, the bronze ‘lucky‘ dragon. His twin was on the Titanic, now nearly 4km down, off the coast of Newfoundland.

It had been a titanic week for me in more ways than one as I’d been working all week with East Wing Gallery at Photo London. One of the artists, Mandy Barker, was showing her series Beyond Drifting: Imperfectly Known Animals. The series was made up of artistically shot images of plastic collected on the beaches of Cobh, in Ireland, the last port of call for the Titanic before she sank.

My experience in pictures

The menu is designed by Brett’s brother Craig. It’s where space age meets the Little Mermaid and bubbles. I had no dessert as I had ordered four starters, forgetting that they were larger than small dishes. The dessert wines were tempting … together with the dessert cocktails, Islay Whisky and digestives.

From left to right: Morecombe Bay, Wild Blackwater and Kumamoto (smaller than the other two, even though the photo does not show this!) Each one divine and each one very different. I ate mine au nature... you can also have them with dashi vinegar and hot sauce, or simple lemon.

A note about the (natural) wine

I have London mapped out for good natural wine – wine made as naturally as possible. The sea-inspired wines at Neptune are carefully chosen by Isabelle Legeron, Master of Wine, founder of the RAW wine fairs and author of the book Natural Wine, my natural wine bible.

I went for a glass of Albariño from the Rías Baixas. This is from the region of Galicia just above Portugal and home to some of the best seafood in Europe.

On the wine list were two producers I had photographed during my travels with Clos Driver Wine Tours: Fanny Sabre (Beaune Clos des Renardes, 2016 – Pinot Noir) and David Léclapart (L’Amateur, Extra Brut, 2013 – Chardonnay) … that’s him in his cellar in Champagne below.

It was also nice to be served a glass of natural wine by someone other than a tattooed wine-geek (male) dude. Neptune is about fun and fashion, not beards and braces.

A walk through The Principal Hotel

I took the back entrance out of Neptune, which took me through the main lobby… wow, was I stunned… the marble walls oozed luxury, decadence, parties… it reminded me of the flappers that I had read about in my grandfathers’ diaries in 1920s’ London.

I didn’t meet a flapper, but I did meet a stylish blogger on the stairs – Man Meets Fashion.

Next time I visit Neptune Restaurant, I want to start with a Neptune Martini (vodka and oyster shell), follow with same David Léclapart champagne with the Exmoor Caviar, Waffles, Chives & Cultured Jersey Cream (at £62 for the caviar, does anyone want to invite me?), followed by the Brill fish dish, and then Baked Cheesecake with Strawberries for dessert… all eaten in the curtained-off private dining space under the Neptune peach glitter ball. Wow!!