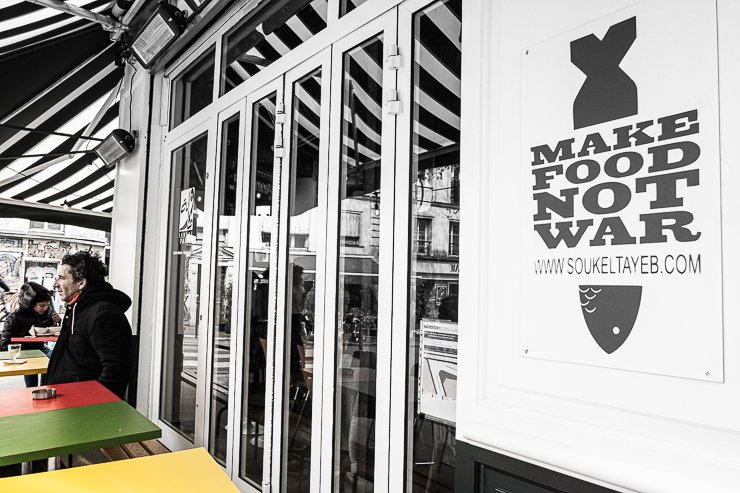 If I could live anywhere in Paris, I would chose an apartment overlooking the Maurice Gardette Square – the largest patch of green in the 11th arrondissement, shaded by mature trees, and with green park benches for whiling away time.

The 11th arrondissement – to the east of the once-hip place of Le Marais – is the cool district in Paris. It’s the place where the locals head to, and the tour buses don’t go.

Can the 11th maintain its coolness? House prices have risen sharply.  Local real estate agents advertise in English as well as French. And meanwhile eyes have turned to even further east, to places such as Montreuil, for more space and lower costs. But that’s the suburbs. For the moment I prefer the 11th.

The 11th arrondissement is so packed with good places to eat and drink that I’ve divided the district into two:

So, here are my favourites for the north part of the 11th and along rue Oberkampf:

Chef Sota Atsumi opened MAISON Sota in a gabled house in the heart of the 11th back in 2019.  The New York Times described Atsumi as a member of a “new guard of Parisian chefs” who brought diners something “more personal and spontaneous” – together with Bertrand Grébaut of Séptime, which is also in the 11th.

Guests at MAISON Sota are welcomed at the door, and then taken upstairs to the ‘loft’ dining area, where there is a large central table d’hôte, made out of an eight-metre long slab of wood. Some smaller tables are also available.

They read my mind when I went there this November (2022), and put me at the bar, overlooking the open kitchen, where Japanese-born Atsumi and his team were busying away.

The lunch tasting menu is at €65. No à la carte, but that’s fine by me … sometimes I like to delegate having to make a choice, especially when I feel at home. MAISON is just that – like a house. As the MAISON motto goes, ‘MAISON you eat, MAISON you feel, in short MAISON you live.’

Next came Salt-Baked Guinea Fowl… you can see them ‘resting’ on the smoking rack in the picture below. For dessert –Tarte Tatin & Olive Oil Ice Cream. And some mignardises, bien sûr, with coffee. The bread is made on the premises – as it should be. I would expect no less.

I went for lunch at Tawlet – see main picture for the exterior – in May 2022, at a time when Beirut was still reeling, as it is now, from the 2020 bomb in the port area. Tawlet means ‘table’ in Arabic. And here, it’s just that – it’s about sharing the table, and the warmth around the table

Founder Kamal Mouzawak is the person behind Souk el-Tayeb, a social enterprise movement to preserve the food traditions and culture of sustainable agriculture in Lebanon. “In a country as divided as Lebanon, nothing can bring people together as much as the land and food,” he once said.

For each day of the week, the cuisine at Tawlet hails from a different region. I was there on a Thursday – the day of the Bekaa Valley, home to Lebanon’s vineyards.

The choice was either a buffet or €14 for the dish of the day – fattet batenjan, a traditional aubergine dish with or without meat, and a salad.

TIP: Seek out the Lebanese 7 spice mix in the restaurant store. It was created by Kamal with Olivier Roellinger of Epices Roellinger. with the seven spices being Jamaican pepper, black pepper, clove, nutmeg, cardamon, cinnamon & ginger.

A small, informal crêperie, whose owner – and chef – I sat next to at the bar at Michelin-starred restaurant Saturne a few years back. (That’s what I love about France – the refined pleasures of life are not just seen as the preserve of the elite.)

Saturne is no longer with us, but BretonsCrêperie is. Crêpes might appear to be the opposite experience to a gourmet dining, but my these are good! Made from organic buckwheat flour. Sweet and savoury.

Back in 2006 the opening of Châteaubriand in Avenue Parmentier set the trend for menus to change with the seasons and for the wine to be natural. It made the 11th the place to be.

Then Basque-born chef Iñaki Aizpitarte opened the Le Dauphin tapas bar next door. The interior of Le Dauphin is designed by Rem Koolhas, but don’t let that put you off – in-your-face design was all part of the early 21st century style.

Both the above were among my gastronomic introductions to Paris food and wine,,, but now I feel that I’m on a different wave.

Chambre Noire – a wine bar for evenings, as featured in The World of Natural Wine by Aaron Ayscough.

Le Galopin – chef Julien Simmonet was previously at Les Itinéraires, of which I was a great fan.

Mulino Mulé – an Italian bistro where they grind their own flour using a granite stone.

Vantre – opened by a former sous-chef at Saturne (an old favourite in the 1st which is now closed) and an ex Taillevant and Bristol sommelier.

The wallpaper behind Oberkampf

A street and a metro station, Oberkampf is named after Christophe-Philippe Oberkampf, a Frenchman of Bavarian origin, and the inventor of a machine to make wallpaper.

I am not too sure what their wallpaper is like, but here are my three restaurants that I want to visit in the area:

Le Clown Bar – where Sota Atsumi made his name

Pizzamarole – a pizza restaurant launched on the site of Rigmarole, as the husband-and-wife team Robert Compagnon (Japan enthusiast) and Jessica Yang (pastry chef) take their “pizzaternité” leave. Look out for a relaunched Rigmarole in 2023.

Discover my other food & wine tips in Paris.