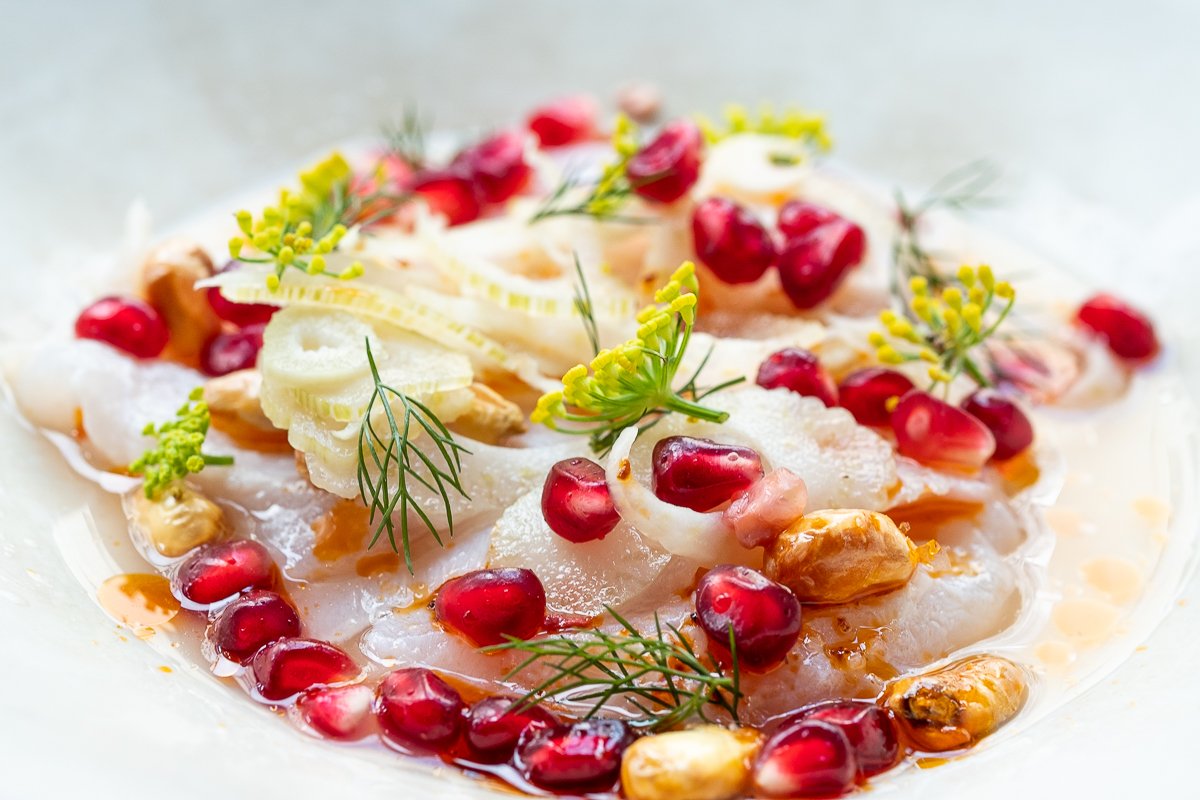 On the rue de Charonne, in the backstreets of Paris’ 11th district, just north of the Gare de Lyon, is a cluster of four extraordinary places to eat and drink: Séptime, Clamato, Tapisserie and Séptime La Cave.

All four places are owned and run by Betrand Grébaut and Théo Pourriat, The duo sparked a revolution in the Paris restaurant scene when the opened Séptime in 2011, fusing emotion with simplicity and opening in the gritty, eastern part of Paris.

Séptime has one Michelin star; Clamato is the more casual seafood neighbour, with space at the bar for if you’re eating solo; across the road is Tapissierie for some of the best pastries and coffee in Paris; and around the corner is Séptime La Cave for natural wine, cheese and charcuterie.

With room only for a couple of stools by the door, Tapisserie may be tiny, but the cakes pack a taste bomb punch and the music elevates the spirits. It’s about seasonal ingredients (thyme & verbena in November), inventive combinations (espelette pepper & orange), and only a sprinkle of sugar. Most people do takeaways. The coffee is also good… from L’Arbre du Café (see my post on Silicon Sentier in the 2nd arrondissement).

A second Tapisserie has since opened in the more chichi 5th arrondissement, near the Tour Eiffel, where there’s plenty of space to sit. They also do savoury takeaways – quiches and sandwiches, for example – perfect for eating on the Eurostar back to London.

If you can’t get a seat at Séptime, you can always wash up at its more relaxed neighbour, Clamato, a seafood restaurant open every day and almost all day.

It’s a must-have address in a city where so often things are closed at weekends or on holidays. Hence why I ate there twice in November 2019 when I was grappling with how to eat and work the not-so-social hours at the Paris Photo art fair.

Dishes that I ordered included: Mesclun, pear, haddock & hazelnuts; Strips of yellow plaice from Noirmoutier with pomegranate & fennel (main image); Squid from Oléron with pepper & pickled grapes; and Roast ceps with fig-leaf sabayon. For the wines, I went for a white Burgundy by Julien Guillot and Le Blanc de la Fosse Vineuse by Thierry Hesnault.

At the time of my visit to Paris in November 2019, a trend had taken hold in New York of ordering a few dishes in one restaurant and then moving on to the next to order a few more. So, with this in mind, during one of my visits to Clamato, I ordered two dishes there and then moved on to Le Servan – run by Bertrand’s wife Tatiana – to follow on with another two.

Le Servan is a 15-minute walk north from rue de Charonne, up the back streets and towards the northern end of Père Lachaise cemetery. It’s a place for more hearty courses and more pepper and spice. Like at Clamato, I sat at the bar. Everyone from the neighbourhood seemed to be there.

I started with Mussels with pepper & Thai basil, and then moved on to Artichoke with Tandoori cream (see image below). Once I had peeled off and eaten the artichoke leaves, the heart was taken away to be re-served with red pepper and chives.

After Le Servan, I walked to Bastille, stopping off to buy granola and bread at Ten Belles Bread, which supplies many a top restaurant in the neighbourhood.

I also could not help but marvel at the industrial architecture of the 11th arrondissement – once full of small factories, and now home to some of the city’s finest eating places.

For next time: the final venue in the Séptime stable is D’Une Ile, a 17th century stone guesthouse set in eight hectares of field and forest in the Perche natural park, two hours west of Paris.