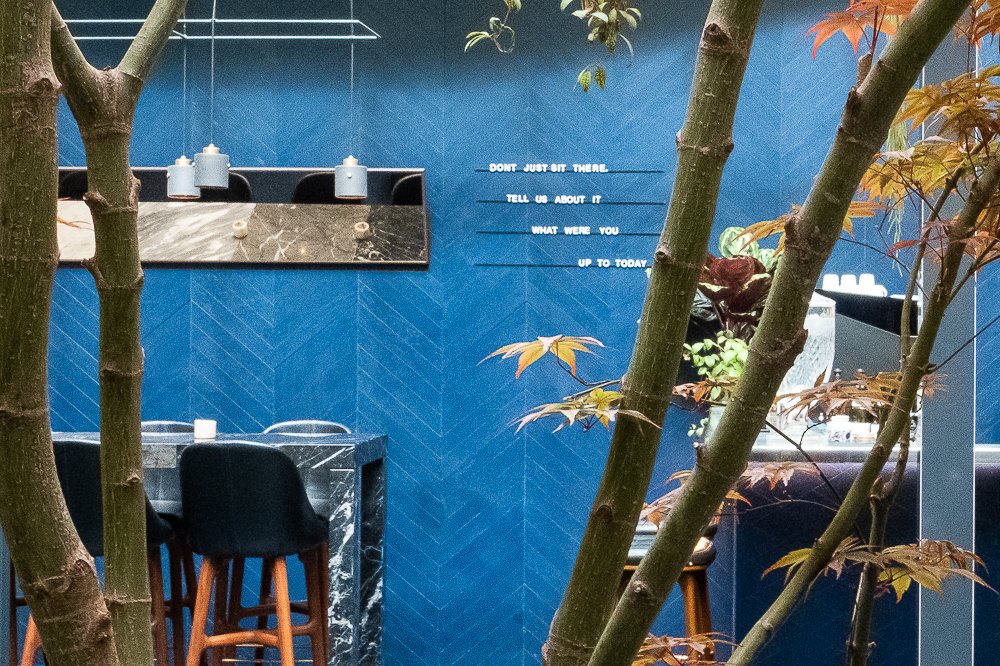 I spent one night and two days in Paris this spring. The one night was at Hotel Amastan, near Le Grand Palais, in the 8th district. I kept on telling people I was staying at the Namaste… wrong name, but there was a namaste touch to the warm welcome that I received at Amastan and to the chilled calmness that prevailed.

I felt at home at Amastan… in my carefully designed, minimalist room; and downstairs in the blue bar, the library lined with red-covered books, and the inner courtyard-cum-sanctuary with its spreading Japanese maple trees. The super cool music made me want to stay all day at the hotel… a refreshing haven from the bustle and noise of Paris, and without the hefty price tag of so many hotels in the area.

“In my daily life, I want to be everywhere doing everything, and in many places,” said Rimbaud-inspired French artist Maia Flore in an interview.

That was me in Paris. I had a sore throat and a cough. Were my lungs trying to expel the pollution of Shanghai? Was I trying to be everywhere and do everything at the same time? Yes.

I knocked back the turmeric drink in my bag, and then – without being conscious – I washed out the bottle in the hotel sink. I went and had breakfast. Came back. Still some yellow stain in the sink. Did it wash away? No.

Drowning in guilt, I walked down to the reception desk. It was guilt rather than shame. Shame is something else. The receptionist took it in her stride… “We have some pretty powerful cleaning stuff,” she said in an understanding way.

Oh I do hope they did.

So now that summer is on its way, and I am focussing on going at the rhythm of my breath. In the meantime, here are some places I discovered in Paris this spring:

Apart from being a great hotel, Amastan is the perfect location for anyone doing anything at Le Grand Palais, such as Paris Photo, and easy to travel west, east north or south around the city.

The sign in the bar reads: ‘Don’t just sit there. Tell us about it. What were you up to today?‘ I could well have stayed there all day.

A small, discrete, stylish hotel, with no lobby cluttered up with tourists in caps and shorts and large suitcases. The one person I met was a Canadian living in London, who stayed at the hotel every week for work.

And I just loved the blue bar. Artist Idris Khan’s latest series is Blue Rhythms. He sees blue as a colour which has an immediate effect on emotion. For me, blue makes me happy. Idris is also into ‘time’, like Maia Flore.

In an interview with Frieze, he recounts how he is into “collapsing time”, whether reading a book or listening to a piece of music… a layering of time. That was how I felt staying at Amastan… I was ‘collapsing time’.

Paris in spring is romantic, and nowhere more so than in the Square des Batignolles, naturalistic gardens designed by Jean-Charles Alphand, also the name behind Parc Buttes Chaumont, where I was last November.

The flowers were beautiful. The water features relaxing. And if you walk up to the round glass belvedere, you may well find an art exhibition – it was an exhibition by British artist Paul Bevan as part of Mois de la Photo-OFF when I was there this spring.

Batignolles, in the 17th district, was where artist Édouard Manet would hang out with his friends in the 19th century. The square is a pleasant 40-minute walk west of Gare du Nord and via Montmartre. No tourists here. On the way, I stopped off for a lemon-flavoured madeleine at Pâtisserie Gilles Marchal, and then for one of my best cups of coffee ever in Paris, at the Bistro L’Atelier des Batignolles, on a corner in the Rue des Batignolles and very near the park.

This was a great little spot for lunch… in the 9th district, south of Pigalle, where my mother used to live many decades ago.

Le Bon Georges Restaurant is very anyone wanting a genuine bistro experience of Paris. Much pride is taken in sourcing the ingredients. One of the waiters was also a dab hand at using my camera to take a picture of me.

Now I don’t usually eat much meat, let alone innards, but after going mainly vegetarian when I was in Shanghai, I thought I must have an open mind.

I went for the set menu. I started with andouille de Guémené, a speciality from Brittany made from stomach casing rolled, smoked and then boiled, served with radishes and spring potatoes … it was really tasty. My new resolution… I must collapse not only into time, but also into openness to new culinary experiences.

Next, I went for brandade de cabillaud, an emulsion of salt cod and olive oil, and typically from the Mediterranean coast of France. The wine was a perfect match – a Fleurie from the Domaine Marc Delienne. which are produced as naturally as possible. I am becoming very fond of little Fleurie for lunch.

Crossing to the Rive Gauche

After lunch at Le Bon Georges, I stopped off round the corner to see an exhibition at Galerie Vue.  I then walked to the spice heaven of Épices Roellinger in Rue Sainte-Anne, near the Palais Royal. I can never go wrong here… this time it was spices for a mild curry and for using with haricot bean stew.

And then over the Pont Marie to the Île Sant Louis. I sent the image below to my son, who knew exactly where it was, and said “mum, that’s my favourite place in Paris”.

A quick stop-over at a few galleries… and then on to Le Bon Marché in the 6th district, and my favourite department store in the world.

I was at Le Bon Marché to stock up on the only make-up that I buy – La Bouche Rouge lipstick. La Bouche Rouge lipstick is natural, vegan, with no micro-plastics or beeswax – and it’s really good. The cases are either vegan or fine leather made in a French tannery, and are refillable and, again, no plastic. A percentage of the price is also donated to a water charity. But I don’t write about beauty products so let me move on. 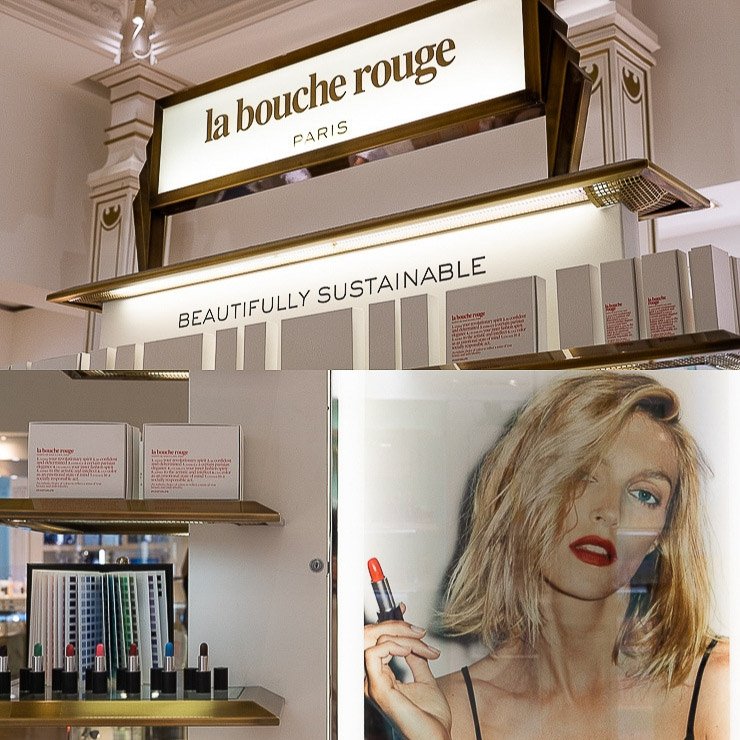 Next stop was Rue du Cherche Midi. I love this street. I went to see an exhibition at Hotel Belle Juliette of works by New York artist Chervine, represented by Galerie Esther Woerdehoff in Paris, where I work now and again. Yoga would also have been nice at Le Tigre, set in a courtyard off the street, but it was closed.

Then it was dinner at Sauvage, renowned for its seasonal, well-sourced ingredients, beautifully prepared, and for its natural wine. I started with a glass of ‘pink’ bubbles, a gamay by Sébastien Morin. Then I had a very nice glass of chardonnay by Sylvain Bock, from the Auvergne, who I had met by chance on a previous visit to Paris.

The sparkling was perfect for putting me in a relaxed state, and the chardonnay went perfectly with the white asparagus and clams for my starter, followed by fish (oops my tired state meant I cannot remember which one) with summer turnips. I also saw that Champagne Olivier Horiot was on the wine list – always a good sign.

Not too far from Gare du Nord, I managed to fit in a galette (savoury) and a crêpe (sweet), as well as a glass of Breton cider, at Bretons Crêperie, towards République, before catching the last train back to London.

This is where to go for a wholesome tasty bite, lunch or dinner. I met the owner – also the chef – at the bar in Restaurant Saturne when I was in Paris in November. A real favourite – a small casual place, with great, simple food and a personal touch.

For my other blog posts on Paris.