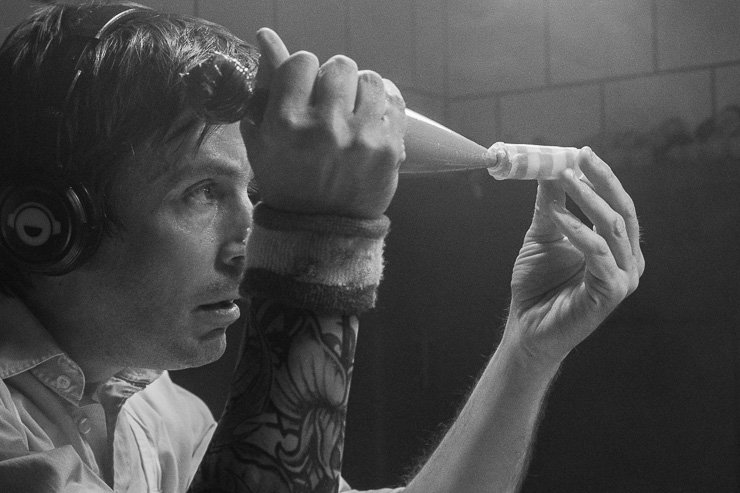 When food meets theatre, and all is a performance to delight the senses – that is the Chef’s Table at Parlour, located discretely in a partitioned-off section of this restaurant off Kensal Rise in NW10.

To clarify, I was across the room from the Chef’s Table but I could catch a glimpse of what was going on through the porthole, and I could see that the five friends were having a lot of fun. Instead, I was eating my plate of home-smoked salmon with soda bread and Lancashire butter, accompanied by a glass of canal-foraged elderflower cordial.

Let me tell you the story of the Chef’s Table at Parlour. It’s at table number 86, by the kitchen, with seating for eight. It’s a one-man show. Welcome…. chef, performer and storyteller, Jesse Dunford Wood, also the name behind Parlour.

Stories are important as they give our world meaning, and we as human beings need that. “After nourishment, shelter and companionship, stories are the thing we need most in the world,” said British writer Philip Pullman.

Story telling is about performance. As Professor Charles Spence, the author of Gastrophysics, who has worked with Jesse, writes in his newly published book: “Restaurants are becoming stages; the waiters and chefs at some of the world’s top establishments are increasingly playing the role of actors and magicians.”

An experiential ‘trip’ with an ‘itinerary’, aka menu, at Heston Blumenthal’s The Fat Duck at Bray will set you back £265 per person, compared with Parlour’s £85. At Parlour you get the sole attention of Jesse throughout the whole meal; he holds the audience emotionally, spiritually and physically…. serving the food himself, with panache, of course!

My Chef’s Table experience at Parlour

Now, from my perch round the corner I could see the activities on the Chef’s Table, just. I couldn’t hear the words, but I could hear the laughter and catch the spirit: the diners were being taken on a journey – a journey as immersive as the play that I was to see at the Bush Theatre the next day.

The evening had started off with Jesse slicing off the tops of bottles of fizz with a sabre. And then there were pheasant eggs, scales, bells, all sorts of things. Hands went up and down, and swung round. It’s about the drama, the intrigue and, as Jesse says, “all of the food is from my heart”.

The experience at Parlour is about ‘commonsality‘ – eating together. You won’t find that word in every dictionary. That spirit of commonsality led the four men, all work colleagues, to invite me to join in the activities on the Chef’s Table just before pudding was served.

The down side was that I was about to order a cocktail and never did, as I dithered between the Odeon Old Fashioned, with Popcorn-infused Four Roses Bourbon, Butterscotch & Orange Bitters, and 51 Shades of Grey, with Cucumber-infused Vodka, Earl Grey Syrup & Bergamot Juice. I’ll just have to go back.

We were each handed a tray of different coloured pills. Each pill had a story. We then popped the ‘miracle’ pill into our mouths, took a shot of lemon, a chew of lime and some red wine. They were all sweet. The pill was made out of the West African berry, Synsepalum Dulcificum, that turns sour tastes into sweet. That’s what Gastrophysics is all about – playing with senses and perceptions.

As Jesse passed us headphones, big ones with flashing lights, scented smoke pumped out across the room. This was the entr’acte. The music started. Six of us, music blasting, lights flickering, all listening to the 2001 A Space Odyssey theme by Strauss, followed by Bulgarian folk music and Shirley Temple singing Polly-Wolly-Doodle… in the link below on Spotify.

It took us on a journey – all together. Try it out at home. You’ll see what a great bonding exercise it is.

The pudding course – Parlour serves ‘puddings’ rather than ‘desserts’ – was pure performance art. Gleaming foil rolled with one sweep down the table; the end sliced off with a sabre. And the music continued… Sauces were dabbed and squirted, in curves and in rounds, and then the puddings were finished with a touch of blow torch. Within a couple of minutes, Jesse had ‘painted’ the long table with puddings.

The table was decorated with Arctic Rolls and Toasted Marshmallow Wagon Wheels, both of which I had eaten at midday, Rhubarb & Milk Jelly, Date Soufflé, Salted Caramel Chocolate Rolos, Hot Cross Profiteroles with Chocolate Sauce and water melon. Somehow so much more irresistible than if placed on one plate in front of you. All edible and waiting to be picked up… the finale.

Parlour is definitely my new ‘local’ in Kensal Green, where I can have breakfast, coffee, lunch, dinner, a drink, even if it is a 20-minute cycle ride away.

It all looks so quiet and innocent from the outside…