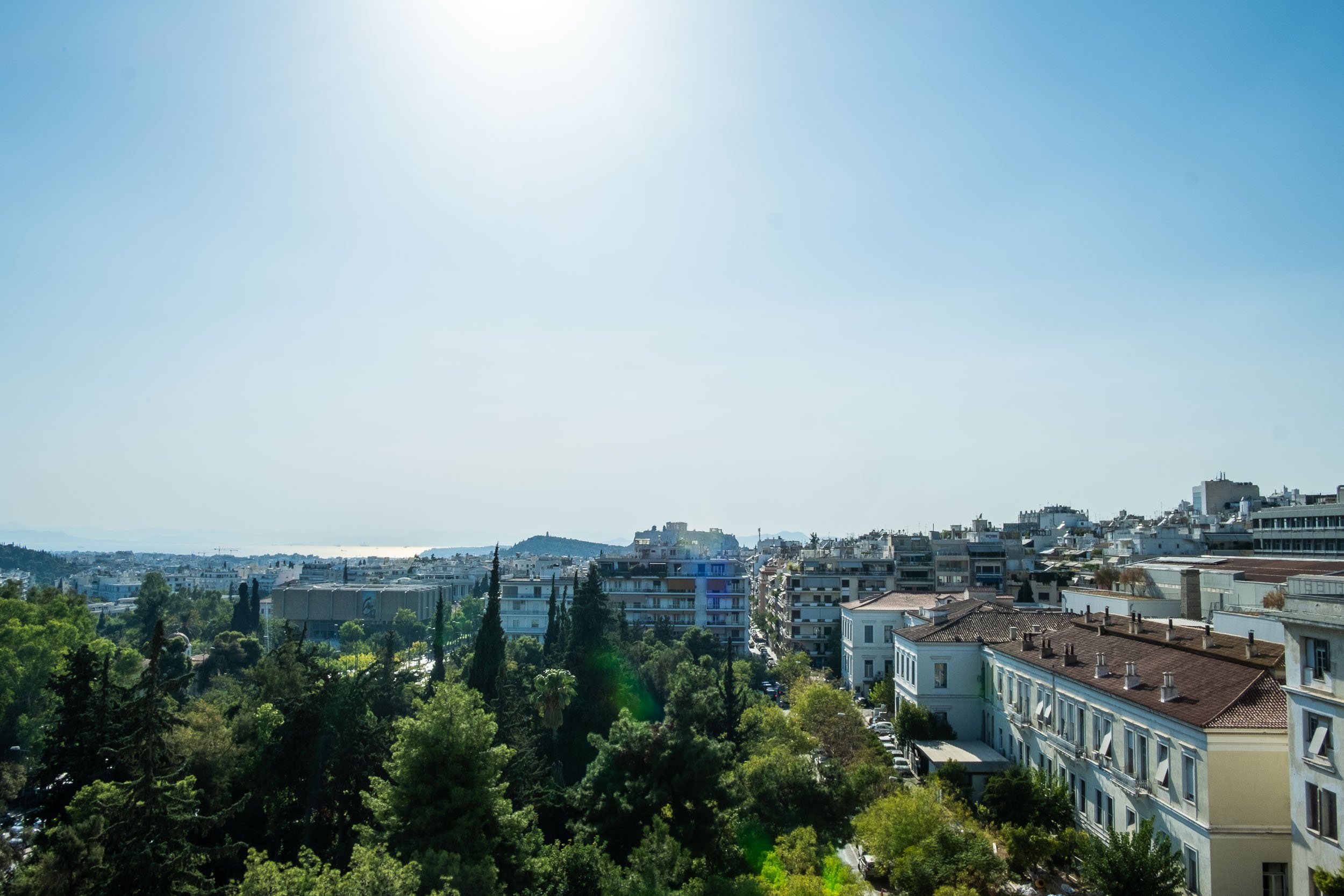 Posted at 09:03h in Conscious How Tos, Greece by Gina Power 0 Comments
Share

Music has the power to lift the spirits, as does the little-known Greek concept of philotimo. Pronounced ‘filótimo’, the word refers to a generosity of spirit, a respect for others; it’s about rising above the pettiness and trivialities of everyday life. Like so many Greek words, it is formed by two: filos (friend) and timi (honour), but put together, they mean much more.

I first learnt about philotimo on the rooftop of The Modernist hotel, looking out across the seven hills of Athens and the Saronic Gulf. As I admired the view, the hotel manager asked me what I liked most about Athens. The friendliness of the people, I answered. Ah, philotimo!” she said , with a softness coming over her eyes.

My lesson in philotimo

I had not seen life through the lens of philotimo on my first night in Athens. I had arrived in the city tired, and giddy from travel and the sounds of the noisy street. I went to eat at a restaurant close to the hotel. The service was slow. My grilled sardines cold, I lambasted the waiter, turning the scenario into a personal trauma.

Why did I react like this? Was I gripped by the fear of not being treated with respect, of not being seen? In the Anglo-Saxon world – not that I am Anglo-Saxon – we are often so fearful of our individual rights being crushed that we have a tendency to lash out in a way not befitting the gravity of the situation. Put the focus on philotimo, and any such fears melt away.

The restaurant in question was Barbounaki, in Mitropoleos Square, across from the Cathedral. A seafood restaurant with its wooden tables and chairs stretching out and under the canopy of the square’s sycamore trees. By the time I had left the city, I had eaten there three times, slowly working through the menu. On my last day, the manager asked me what I liked most about Greece – it seems to be a standard question. “The idea of philotimo,” I replied, His eyes softened as I mentioned what seems like a hallowed word for many Greeks. A word with a meaning too deep to be translated.

Philotimo makes for the perfect getaway

The homeland of philotimo makes for the perfect getaway. The people are open and hospitable. And then add to that the bountiful sunshine, the abundance of azure blue (in the sky, the sea, in design), the chiming church bells, the Mediterranean food and the murmur in the streets of people enjoying life – and, of course, its ancient, mythological history.

Yes, it is a busy city with lots of cars and plenty of plastic straws. But it’s also a city where the concept of philotimo helps you to learn tolerance – and to feel blessed by such a communal spirit.

I stayed at Ergon House, between Syntagma Square and Monastiraki metro stations. The location is excellent. Ergon (which means ‘vocation’) House is a ‘foodie’ place, with a modern-day agora, or market, and a restaurant, on the ground floor, specialising in artisanal Greek produce. If you’re fussy like me – and like spacey window views – make sure not to get a room overlooking the agora.

The breakfasts are sublime, especially the penirli, or Greek pizza. The house offers cooking classes, and there’s a rooftop bar and eating area. You can find 13 Ergon stores around the world, including in London and Brussels, and at Athens airport. It was also at Ergon House that I discovered Greek coffee, sitting at the bar.  Far better for the digestion, and not with the bitterness of an espresso.

Where to eat pastries & ice cream

Food is good and simple in Athens, however, fish tends to be farmed, especially the sea bream. Portions are generous.

A must for pastry lovers is Takis Bakery, a few minutes walk from the Acropolis Museum, on the other side from the Panetheon. I had a bougatsa (a custard pie with filo pastry) and, for later, a spanakotiropita (spinach & feta pie) … I learnt they are best eaten fresh.

For ice cream, go no further than Le Greche, in the same street as Ergon House, Mitropoleos Street. I went for a double scoop of ricotta, bergamot & Aperol Spritz with fig sorbet.

At the Bernard Tschumi-designed Acropolis Museum you can learn about the archeological treasures, while looking out of the windows to admire the views of the Parthenon temple. However, my visit did make me want to join the campaign to return the ‘Elgin Marbles’ to their home – the marble sculptures had been hacked off the Parthenon by an Englishman, Lord Elgin, in the 19th century, when Athens was under Ottoman rule, and then sold to the British Museum, where they are still to this day.

For my next trip to Athens, I woud like to visit the recently reopened National Gallery, across the highway from The Modernist, and the Museum of Cycladic Art, also in Kolonaki; and the Benaki Museum, spread across three locations.

For lovers of contemporary art, visit the National Museum of Contemporary Art, EMST, which reopened last year in the former FIX brewery in central Athens. I will next time. I attended a dinner on the rooftop, with views of the Acropolis, as in so many locations in Athens.

I also went to the 7th Athens Biennale – held in three buildings, one of which was the former Fokas department store. Also find out what NEON is up to in Athens.  I had wanted to head to the DESTE Foundation for Contemporary Art. Time did not allow me. It is quite far from the centre. (See my upcoming blog on Hydra for more about the DESTE Foundation). It’s worth checking out Current Athens, which promotes contemporary art in the city,

Three useful words, broken up to make them easier to remember:

The eighth hill of Athens

The Stavros Niarchos Foundation Cultural Centre – an iconic building designed by Renzo Piano as the eighth hill of Athens, and set in a Mediteranean garden and park, where I found the Cosmos in Motion exhibition with 46 works by Greek artist Takis (1925-2019).

The centre offers stunning views across the city and, in the other direction, towards the Saronic Gulf. It’s also home to the Greek National Opera and the National Library of Greece. Look out for the free shuttle bus that leaves for the centre every hour from Syntagma Square.

In the foothills of the Acropolis

My favourite neighbourhood was Plaka, in the foothills of the Acropolis, with its narrow streets and cube-like, stone houses. The area of Anafiotika has a Greek island feel, with its white-washed houses with blue windows. The houses were built during the time of Otto of Greece for craftsmen from the Cycladic islands.

If you take the stepped Mnisikleous street, up from the from tourist shopping street of Adrianou, towards the Acropolis, there are plenty of little restaurants. I was recommended Yiasemi (or jasmin), which offers a vegetarian breakfast buffet for €10, but I never ate there.

A modernist city of neighbourhoods

Athens is a city of neighbourhoods.  I only visited a couple. Back in 1832, when Bavarian prince Otto became King of Greece, only 4,000-5,000 people lived in the city. Now it’s over three million.

The city is known for its polikatoikia: modernist, concrete buildings built between the 1950s and 80s, when Athens expanded rapidly, and using a ‘land-for-flats’ model of financing and the Le Corbusier-developed Dom-Ino system.

All the apartments have big balconies. Any floors above the sixth have by law to be set back in tiers, while ground floors are home to shops and small businesses, and leading to a social differences being more vertical than horizontal, with the better off living at the top of the building.

The Naxos Apothecary – a new take on an old-style pharmacy, with phytotherapy formulas and herbal cosmetic products. Named after the biggest of the Cycladic islands.

3Quarters – upcycled balcony awnings made into bags, individually cut and sewn. Backpacks, vegan bags, tote bags, shoulder bags. Great colours. Waterproof. This will be the first shop I head to when I’m next in Athens!

Evi Grintela – I never got here, but it was on my list. By appointment only. A fashion brand famous for its shirt dresses.

Now, we can’t forget the Athens Central (Varvakios) Food Market, where I bought a huge bunch of grapes for just over €1.

I opted for the €2.30 double metro ticket. This allows you to get on and off different modes of transport over a 90-minute period with just one ticket. The metro from the airport costs €9 one way and takes you to Syntagma and Monastiraki stations. From Monastiraki there’s also a direct train to Piraeus for the ferries to the islands.

With philotimo, it means that people are more than willing to help you find your way around.

I was in Athens for the Monocle Quality of Life Conference 2021. I would like to thank Monocle for helping me open my eyes to such a fantastic city and giving me the opportunity to meet so many fabulous people.

Blog post on the island of Hydra to come.