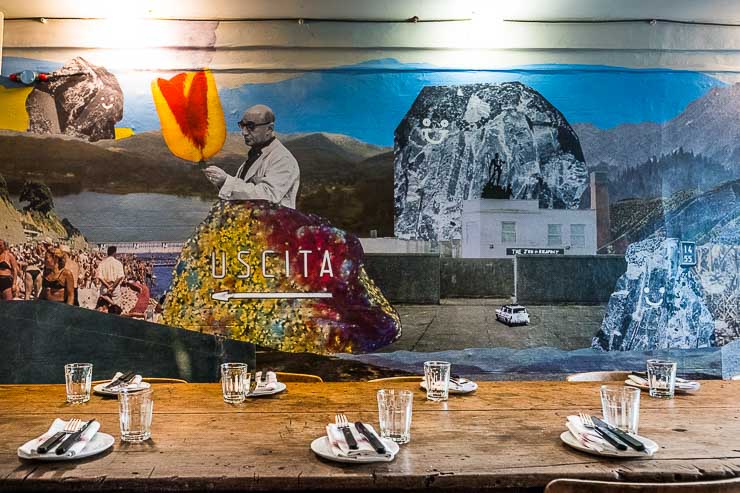 Brothers Matteo and Salvatore Aloe started Berberè Pizzeria in the Italian city of Bologna in 2010. Now leading Italian newspaper Il Corriere della Sera has chosen them as Italy’s No 1 pizza to taste. And you don’t have to travel to Italy to see for yourself. You can find Berberè’s London offshoot, Radio Alice, named after a 1970s pirate radio station in Bologna, in Hoxton and Clapham.

I have eaten 7 Radio Alice pizzas, not all at once, from the vegan beetroot base pizza with leeks & olives to the pizza with speck, gorgonzola, fiordilatte mozzarella, honey & walnuts. These are pizzas made as nature intended them to be. They use natural ingredients, including the yeast, mostly organic, from small producers, and tried-and-tested techniques dating back decades, if not centuries.

Radio Alice, like Berberè, is about the ‘pop soul’ of pizza, as the Aloe brothers say. It even has its very own radio station, Pizza or Vinyl, based in Bologna. The sounds are diverse, nostalgic, fun. Rock merges into Italian pop and then on to funk and soul.

For me, Radio Alice is about the resurgence of pizza – pizza as a simple, natural pleasure in life, made with simple, quality ingredients.

When I think pizza, I think Vespa scooters, La Dolce Vita, and the sheer beauty of the sea and sky of the Amalfi coast. Pizza is not only a playful food with a soul; it’s for everyone – like the One Two Three swings at the Tate Modern.

It’s all about the ingredients

I am a sucker for good basic ingredients, sourced from growers, makers and artisans working with passion, expertise and skill, and ethics. That’s because food produced with such ingredients makes me feel good; it makes me happy, and at one with the world – like sunshine every day.

The food and drink at Radio Alice is about:

If I go for the Fiordilatte mozzarella, tomato and basil pizza, with a glass of Nero d’Avola wine and a coffee, the bill comes to just under £15, service to add. Who says well-sourced, organic food and wine has to be expensive!

Not all wheat & yeast is equal

The third time I ate at Radio Alice I met Matteo Aleo. He explained that the long stalk of the wheat used to make their flour means that the roots go deeper into the soil. These deep roots fetch more water and more nutrients, and hence need less intervention than the shorter-stalk, high-yield hybrid varieties that most farmers favour.

Radio Alice’s flour is stoneground, organic, Type 1, using 80% of the grain, rather than the 50% for Type 00 flour. This gives more bran, more germ, more taste, more nutrition, and less starchy carb that takes you on a sugar high.

The yeast is a naturally occurring mother yeast – the mother of mothers is back in Italy.  The dough is left to rise for 24 hours at a controlled  temperature. The pizzas are cooked in an electric oven to maintain a consistent heat, using a technique perfected to have a crisp outside and a soft inside.

I discovered a while ago that I cannot take bread made with commercial, quick yeasts. It leaves me with an uncomfortable feelings in my stomach.

I came across Radio Alice by chance, via word from Dubai, such is the modern world. Now, I don’t usually write too much about mainstream experiences. The London ‘project’ of the Aloe brothers, Radio Alice is not mainstream. However, it is backed by the Azzurri Group, who owns the chains ASK Italian, Zizzi and Coco di Mama. Working with them is also Emma King, the co-founder of Gails’ Bakery.

When the news fell, it made me suck my teeth. Does it really make their pizzas and what they are doing any less authentic? No is my final answer. I want to now congratulate all those helping to bring such an exciting concept to London.  This is food as nature intended it to be. Just please stay true to the concept. And in the meantime, I’ll be back.