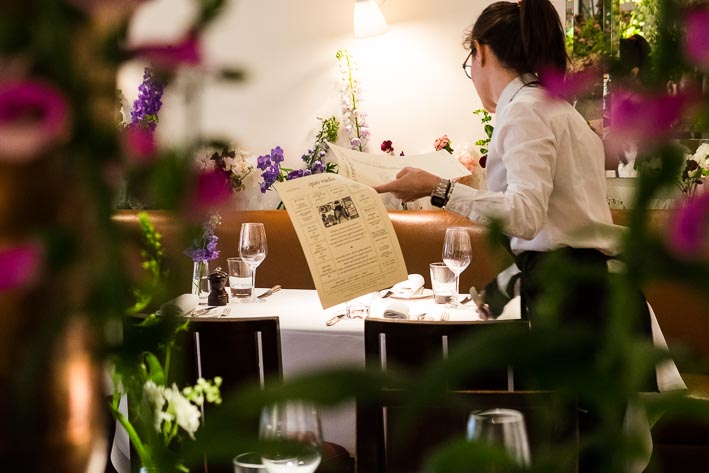 Quo Vadis – Latin for ‘Where are you going’ – sprawls across four Georgian townhouses in the heart of London’s theatre & club land. Karl Marx counts as one of the former inhabitants of the buildings.

Stained glass windows, and pavement tables & chairs shaded by canopies allow the edgy Soho vibes to resonate through this cosy bolthole for those who love the finer things of life, whether while working or playing.

90 years of history at Quo Vadis

This year, Quo Vadis celebrates its 90th anniversary. It first opened in 1926; the ‘Roaring Twenties’, a heady time of Art Deco, nightclubs, jazz clubs, cocktail bars & flappers, so well portrayed in the novels of PG Wodehouse and Nancy Mitford.

All this in buildings dating to the 1700s, the time of Austen, Byron, Colderidge & Wordsworth, as well as London satirist William Hogarth, who captured the licentiousness of pre-Victorian British society so well in his drawings.

These two periods are among the most fun (for the better off) & heady in British history. Their spirit lives on at Quo Vadis, together with the stylish modern decor, amusing wall illustrations & carefully orchestrated lighting.

The Kings of Soho’s food scene

Sam and Eddie Hart relaunched Quo Vadis in 2007. The two brothers had already established themselves as the Kings of Soho’s food scene with the successful launch of tapas bar Barrafina, another London favourite. There are now 3 Barrafinas, all in the Soho-Covent Garden area, with Barrafina Frith Street gaining a Michelin star last year.

The Harts come from Rutland originally. I know Rutland well as my son went to school there… only for 10 days, though, as he was then ‘asked to leave’. It’s a land of wide open farmland, blasted by the winds that come down from the North Sea, stylish old houses & friendly rural types.

The ‘ menu is amended ‘daily & merrily’ to reflect the seasons & the spirit of chef, Scotsman Jeremy Lee, who joined Quo Vadis in 2012 after honing his skills with such great names as Simon Hopkinson and Alastair Little.

But Quo Vadis is more than a restaurant… it has the feel of a club, a stylish club, frequented by creative types, and social movers & shakers. And it’s open for breakfast, lunch, dinner & cocktails, as well as private dining.

Quo Vadis on a Saturday night

I first went to Quo Vadis for dinner on the Saturday night which was the last day of April. It was the choice of my two friends, a Creative Director and the Founder of a marketing agency, who is now turning her hand to making denim.

We started with cocktails at the bar. I just loved the chilled metal straw; it made the Corn’n’Oil cocktail of house grog, falernum (an infused syrup from the Caribbean) & lime taste even better. We then went through to the dining room & proceeded to have Asparagus, Salsify & Parmesan. I then took the Salt Pork, Little Vegetables & Green Sauce for mains, & we washed it all down with some very pleasant Sicilian wine & then shared a chocolate pudding. This was followed by a night cap in the members-only bar upstairs.

In celebration of  Chelsea Flower Show

I returned last week for a quiet lunch in the bar & to take some photos.

Quo Vadis is about celebration, as well as merriment, & this time they were celebrating Chelsea Flower Show week, a firm favourite in the British social calendar. The bar and restaurant were adorned with blue, white, purple & pink flowers, and red peonies in the reception area.

To be honest, I’ve never met staff who have made me feel quite so at home. And it wasn’t just me. All those arriving for lunch were given a warm welcome – and many were greeted by name. I’ve known people who come here every week. I can see why.

Eating at the bar

Quo Vadis is the only place where I can eat eel… the Smoked Eel Sandwich, with horseradish sauce, is DELICIOUS! Fingers are the only one way to eat it. It does make me want to sneeze though. This time I accompanied it with Ricotta, Pea, Mint & Sage Crostini and a glass of house Albariño, the Galician white wine that goes so well with fish.

What the British excel in… puddings

Now this was meant to be a light lunch. But the Maitre D’ must have seen I was for corrupting as he merrily gave me the pudding menu. Now Britain is famous for its puddings. We – I also have Irish nationality – are traditionally more inventive with our puddings than with any other course.

The temptation was too strong. The favourite on the menu is the Sticky Toffee Pudding with Cream & Ice Cream. My desires led me to the Pistacho Cake with Apricots, Custard & Ice Cream. These additional calories later proved very useful to get me through my evening yoga class, especially since I’d had only 5 hours sleep the night before.

Before leaving, there was one last thing I wanted to do… buy the Quo Vadis sourdough bread to take home. The round loaf, about 40cm diameter, carefully wrapped in Quo Vadis paper & clingfilm, is now safely cut up and in my freezer, ready to take out slice by slice to remember ‘merry’ times.

I also just loved the slightly faded Union Jacks outside. They lent themselves to the sense of jolliness and made me think of Jilly Cooper’s book, Class. One of the tenets of the book is that the upper classes and the lower classes tend to do what they like… it’s only the middle classes who fret about what others might say.