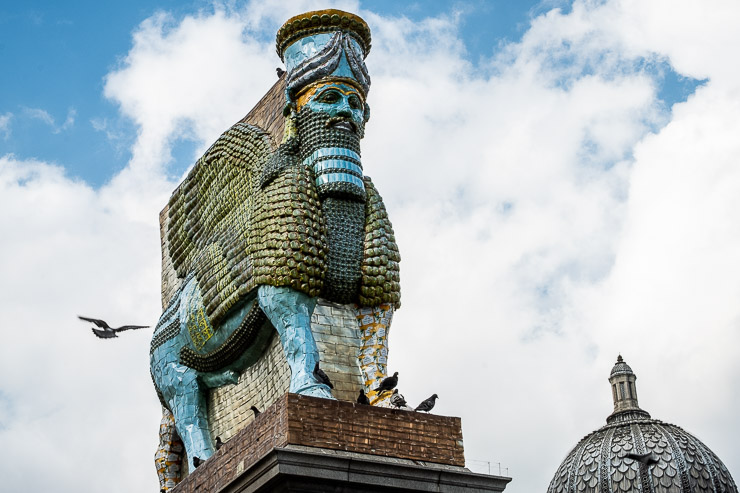 03 Aug Rakowitz: the artist who makes art out of date syrup (E1)

Ancient Iraq. Dates. Art. Cooking. A link made possible by Iraqi-American artist Michael Rakowitz, whose artistic recreation of the winged bull Lamassu stands guard on the Fourth Plinth in London’s Trafalgar Square – the plinth reserved for temporary works of art.

Rakowitz’s Lamassu will be there until 2020: a protective deity, much needed in Trafalgar Square. The other three plinths are occupied by nefarious men: two warriors who helped to maintain control and plunder the Indian sub-continent (Henry Havelock and Charles James Napier), and one dissolute and irresponsible king (King George IV).

The original Lamassu had stood since around 700BC at the entrance to the ancient Assyrian city of Nineveh, near present-day Mosul. The deity’s powers were not enough for Daesh (ISIS), though, who destroyed the statue in 2015. Now the Lamassu lives on as a “ghost”, as part of Rakowitz’s ongoing series The Invisible Enemy Should Not Exist.

The Assyrians made the original Lamassu out of stone. Rakowitz has made his recreation out of more than 10,000 empty tins of date syrup. Iraq was once the date epicentre of the world, with 30 million date palms in its heyday. Recent war destroyed many of them. Only three million surviving the 2003 Iraq invasion by the US and its friends.

In the Middle East, dates are an ancient food staple. They sustain life and the home – date palms give shade, their fallen leaves are woven into furniture, their wood made into houses.

A House With A Date Palm Will Never Starve

To bring the “taste” of the Lamassu into our “cupboards and bellies”, Rakowitz wrote a cookbook, A House With A Date Palm Will Never Starve.

The book, named after a Middle Eastern proverb, is a compilation of recipes using date syrup from 41 chefs. One of the recipes comes from Rakowitz’s mum, Yvonne, whose father fled Iraq in 1947 for the US. Many others are from world-famous chefs: Yotam Ottolenghi (Ottolenghi, NOP, ROVI), Sari Packer & Itamar Srulovic (Honey & Co), Alice Waters (Chez Panise) and Marcus Samuelsson (Red Rooster, Aquavit), to name a few.

An Iraqi feast at the Whitechapel

One evening this July, Rakowitz cooked an Iraqi feast at the Refectory in the Whitechapel Gallery in East London. He was joined by Philip of Juma Kitchen in North London. The feast was in honour of the humble Iraqi date, and also of Rakowitz’s exhibition at the Whitechapel.

Cooking as a way of “celebrating the family’s origin”

That evening, Rakowitz and Juma cooked for us, cared for us, lovingly binding the ingredients and ladling out the dishes. The laughter flowed as the tales rolled. It was a time of harmony and sharing, between peoples, between faiths; nourishing the body and the relationships around the table.

In her introduction to Rakowitz’s cookbook, celebrated Middle Eastern writer Claudia Roden says: “Food becomes more important in exile. Families hold on to their dishes for generations… [Michael] has used cooking as a way of celebrating the family’s origin and the harmony that once reigned between Jews and Muslims.”

Michael Rakowitz at the Whitechapel

After the meal, we overspilled into Rakowitz’s exhibition – a space that we had all to ourselves.

The eight installations focus on architecture and artefacts, and what they can tell us about suppressed histories. They range from White Man Got no Dreaming, made with an Aboriginal community in Sydney, to The Breakup, which charts the rise and break–up of The Beatles alongside that of pan-Arabism. Egyptian nationalist leader General Nasser, who overthrew the monarchy in 1952 and introduced far-reaching land reforms, died the same year that The Beatles broke up – in 1970.

In his ongoing series The Invisible Enemy Should Not Exist – of which the Lamassu is a part – Rakowitz has recreated, life-size, some of the 7,000 works stolen or destroyed by the likes of Daesh (ISIS) using packaging from Middle Eastern foodstuffs, found in the US.

In his book, Rakowitz recounts the tradition in Iraq of placing a date into the mouth of a newborn. This ensures that their first taste of life is sweet. “Here’s to a sweeter future,” he writes.

Life will always go from sweet to bitter and back – I believe in the dualism of life. But that evening, at the Whitechapel Gallery, I received a dose of sweetness. And it made my life that little bit better.