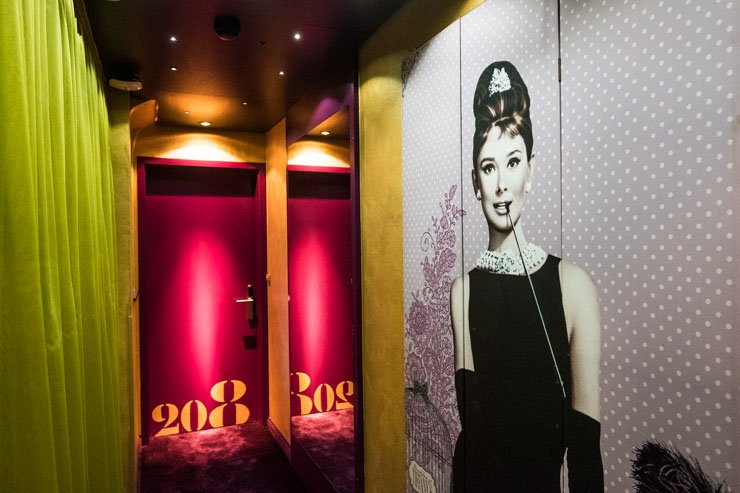 Alsace wine in particular goes well with food. It’s the salinity of the wines, I was told. My culinary height during my 3-day trip in Alsace with Clos Driver Wine Tours peaked at Restaurant 64°, part of Hotel Chambard, in the attractive town of Kaysersberg.

This Relais et Chateaux hotel is run by the Nasti family, with Olivier Nasti the name behind the two-Michelin starred restaurant.  The 64°, or 147°F, refers to the perfect temperature to boil an egg – when the white and yolk are cooked uniformly, and minimally … although some say it is better at 63°.

For Olivier, it’s about getting things just right, cooking with “feeling” and with the “market’s mood”. For me, I think I’ll stick to my 3 minutes to boil an egg, at whatever temperature as long as the water bubbles. 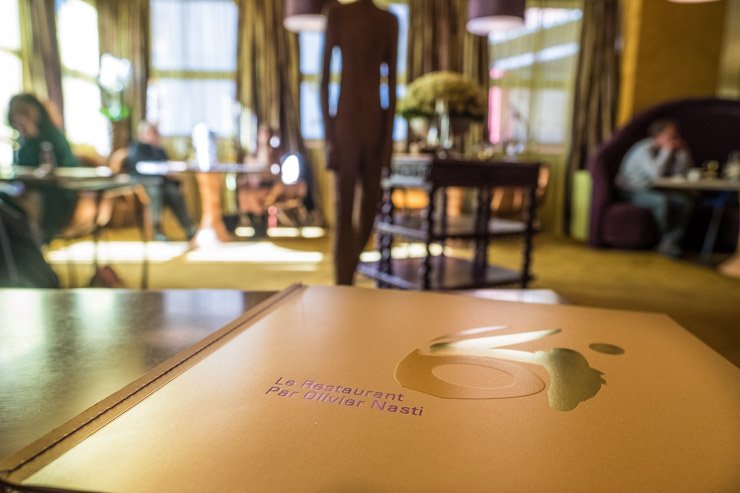 The design of Restaurant 64° and Hotel Chambard reflect the Alsace sense of colour and vitality. It’s not just about bright-red geraniums and eyeball-zapping coloured half-timbered buildings … it’s about the vibrant & tasteful modern use of colour with creatively led design.

That vitality and openness is found in the people as well. When I asked ‘how come?’, the answer from one wine producer was that it sprung from the conviviality of the Germans, given that Alsace has yo-yoed between France and Germany over history. I mentioned that to someone in a cafe in Strasbourg, of a younger generation, and he looked aghast and bewildered.

For me,  the difference between one and two Michelin stars is that I would travel expressly to a two Michelin-starred destination.  In the same way, to the extreme, that I flew to Lima to eat at Central Restaurant. A one Michelin-starred restaurant has to be more or less in the area that I am visiting.

We went for the lunchtime Menu du Chef at €50, without wine. Looking at a few 2 Michelin-starred set menus in London, this was a bargain. That was for three courses, but then there were two mise en bouche and mignardises with the coffee. There’s also a 5-course menu for €125 and an 8-course menu for €178.

64° is known for its wine list, pulled together by Emmanuel Nasti, the brother of Olivier. We went for a Pinot Noir, the only red grape variety grown in Alsace. It was from Domaine Schoenheitz… on the road between Colmar and Le Hohneck, the third highest mountain peak in the Vosges, at 1,300m, near the Botanical Garden of Haut Chitelet, where I worked one summer as a student.

I have a story that I will never forget about my time at Haut Chitelet. On my day off, I was invited for a drink in Colmar by a good-looking French guy, the guy who had introduced me to the Botanical Garden. He took me to Colmar, but I hadn’t taken off my thermals as it was so cold in the mountains, albeit that it was August.  I roasted all afternoon, not making a good impression. I thought of taking off my thermals and stuffing them in my bag, but alas, my bag was too small. I never saw him again.

The second mis-en-bouche was a Michelin-starred interpretation of Flammenküche – Alsace’s answer to pizza.  This had no base, just the pure flavours of smoked lardon, the boldness of some onion, with a delicious creamy texture.

First course was Cannelloni of Breton Lobster, with Leeks & ‘Eggshell’ of Burnt Onions, and First Green Asparagus from Provence.

Then, Quail from Challans, in the Atlantic department of the Vendée region, with Jerusalem artichokes, Spinach & Beurre Noisette

Dessert: a splendidly sculpted ‘Eyelets’ of Crispy Apple with its Own Sorbet… and, no, that’s not chocolate sauce; it was part of the plate’s decoration.

There’s something very comforting about eating buttered bread. This time the bread was in the shape of the traditional Alsatian cake, Kuglehopf,  found all year but primarily associated with Christmas; a kind of sponge panettone. As for the butter, there was a choice of 3 – like choosing cakes in a cake shop. 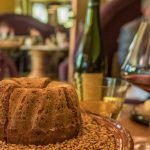 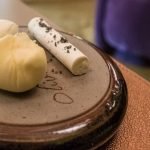 We then had a quick tour of the hotel. 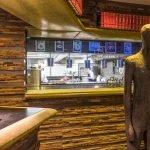 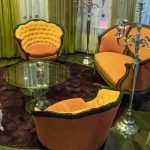 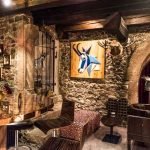 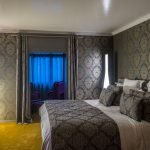 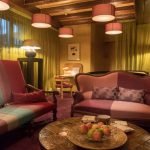 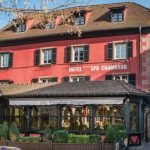 The spa had an ingenuous treatment. I chose a colour… mine was Emerald, which symbolised the need for oxygen, and then my spa treatment would have been adapted accordingly. I could even take away (at a cost, I presume) a therapeutic, ‘Emerald’ perfumed spray. Unfortunately we were there just for the restaurant, and there was another visit to a domaine scheduled.

We ate twice at Olivier Nasti’s restaurant across the road, Flamme & Co, whose speciality is Flammenküche, or tarte flambée, as you will often see written. Loved this informal place, where you could sit at the oval bar and watch the Flammenküches being cooked in the open oven.

I felt at home in Kaysersberg. If I go back, when I go back, I’d like to do one of the walking trails through the Kaysersberg valley, and possibly even up to the Vosges mountains.