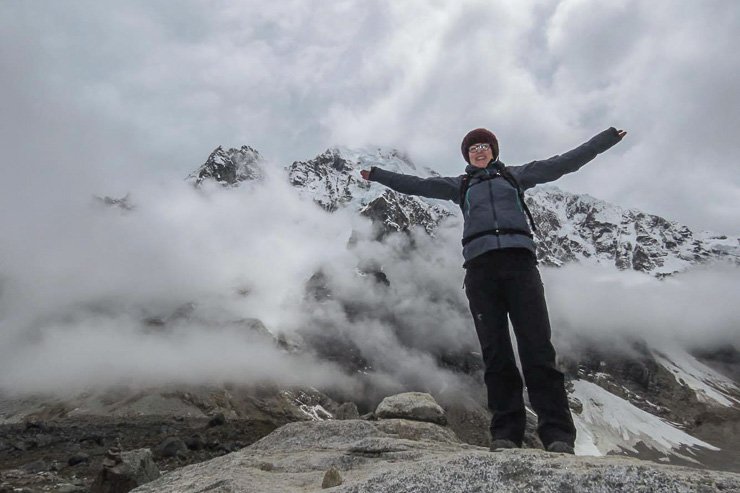 I went higher than I’d ever been in my life when I visited Peru this October. I crossed the Salkantay Pass, climbing to 4,630 metres, or 15,200 ft, almost as high as Mont Blanc.

The Salkantay Trek is a (stunning) alternative to the over-popular Inca Trail. It’s also a great way to get to know the terrains that provide the ingredients for the high-altitude dishes of the 16-course Tasting Menu at Central Restaurant in Lima – the 4,100 metre,  3,800 metre and 2,300 metre dishes.

Salkantay is south of Machu Picchu. When viewed from Machu Picchu’s main sundial, this ‘feminine’ mountain is aligned directly below the Southern Cross when the constellation is at its highest in the sky. The mountain was sacred for the Incas, and still is for those of Inca descent; it’s worshipped as a God who controls fertility and the weather.

On the approach from Sorayapampa, Salkantay is flanked by two smaller, masculine mountains. The power of the feminine? No. Incan culture is about duality, balance… the feminine needs the masculine to be in balance. The mountains, in Incan culture, are the apus, the grandparents – the spirits always there to look after us, and which allow you, or not, to enter into the mountains.

The rise of the Incas

The Incan Empire is ranked by some as the largest kingdom in the world in the 16th century. That was until a small band of mainly illiterate fortune seekers from the south of Spain arrived at their gates, equipped with guns and horses, to cruelly crush their power and their people.  Llamas and gold were no defence. For an interesting read, try Kim MacQuarrie’s “>The Last Days of the Incas or John Hemming’s “> The Conquest of the Incas.

As I learnt from my trip to Peru, the Incan culture lives on … if not growing, at least in the Andean city of Cusco. Lima is another story.

On my bedroom wall in El MaPi, the Inkaterra hotel where I stayed on the last night of the Trek, in the town of Aguas Calientes, at the base of Machu Picchu, there was a quote: “… every experience is a form of exploration,” by US photographer and environmentalist Ansel Adams. And my God did I explore during my walk of the Salkantay Trek.

The Salkantay Trek – feeling the ayni

I decided to walk the Salkantay Trek on the suggestion of Michael Sager of Sager & Wilde. He also suggested eating at Central Restaurant. It will be one of my highlights of 2016, and my God it was one hell of an experience.

I do kundalini yoga once a week & I walk a lot… but nothing prepared me for walking at altitude. Some people are affected; others are not. I had spent two nights and a day acclimatising in Cusco, but maybe that was not enough, for me.

The Salkantay Trek is about going up, up, up to the Salkantay Pass and then down, down, down to Aguas Calientes, at 2,050 metres (6,725 ft), at the base of Machu Picchu.

The trek was for four nights and five days, 130kms, or 80 miles. A group of 7 trekkers from Brazil, Switzerland, Australia and Britain, together with our amazing guide Miguel, whose Quechua name is Yuraq Illapa, as well as the horseman, cook and cook’s assistant.

The rainy season was not meant to arrive till November, but it rained almost every day… and it hailed so heavily I had to incline my head to stop my glasses from getting chipped. But even the Brazilians, who had left the beaches of Rio for the erratic weather of the Andes, soon got used to it.

The temperatures plummeted at night, down to zero centigrade, then with a strong sun in the day, it was hot. On the lower slopes, the mosquitoes flourished… and then there were the early morning wake-up calls, luckily with a mug of coca leaf tea, followed by up to 9 hours of walking each day, mostly at altitude.

Like the Incas, who worshipped the sun and the moon, we resonated with the rhythms of nature… and the duality of the weather.

And, yes, I loved every minute of it! So much of the good feeling in the group was about the ayni, that lovely Quechua concept of reciprocity, of working all together.

With the help of coca leaves

I sought comfort in chewing coca leaves; most of which I ended up swallowing. And I was consoled by the fact that the surrounding landscape was so beautiful and emitted such a vibrant, magnetic energy that if I were to collapse, this would be the place to do it.

I tell the truth, I did the last 2 hours of the climb to the Salkantay Pass on horseback. I know my body’s limits. I felt in control on horseback, having been out to Argentina for three years in a row, staying at Estancia Los Potreros, a place that I recalled had a similar kind of energetic field, even though the mountains were much lower and the landscape totally different.

Before climbing up to the Salkantay Pass, and on arrival at our first campsite at Soraypampa, we took an afternoon diversion to the glacier-fed Humantay Lake, at 4,200 metres (13,800 ft).  Not everyone felt the cold that afternoon… but I can tell you, the water was FREEZING!

Up to the Salkantay Pass

We arrived at the top of the Salkantay Pass on the second day. The Gods and the mountains had been kind to us. The clouds cleared a bit and the rain held off. The main picture on this blog is of me, triumphant, having reached the top, clad in thermals and waterproofs.

Once a couple of other groups of trekkers had moved off, we huddled round our guide who put together four coca leaves in a quinto ceremony, ending with a few notes from the flute Miguel had tucked in his backpack.

Horses were used to carry our bags from one camp site to another. The horsemen followed the horses on foot. While I staggered, puffing and panting, up the slopes, the horsemen would pass us by, almost hopping and skipping along the rocky paths. It made me feel a bit pathetic.

Nature: walking down from the Pass

The afternoon of Day 2, we started to go down, down, down…. Miguel showed us the trees and the plants used by the Incas, and still used today, and the rocky chunks of aluminium that sparkled when the sun came out.

The descendants of the Incas look to nature to cure ailments, like I found in Sri Lanka. They also work in conjunction with nature for their ceremonies, whether with coca leaves, chicha beer, and other plants… as well as the ayahuasca mix of plants from the Amazon, and now very popular with travelling Westerners, as well as featuring in the recently released Absolutely Fabulous film.

For the Inca descendants, it’s about the journey rather than the medium… and that journey needs to be made with the right spiritual preparation, guidance and containment, all which take time.

As we dropped down to Huayracmachay, much of the route was along rivers.

The villagers along the route eked a living from selling water and food to the trekkers.

On the lower levels, now down to more around the 2,000 metre mark the vegetation got richer, verging on the tropical. Thinking back to the Central Tasting Menu, here there is  not only passion fruit, but ginger, avocado, various edible flowers and squashes.

On Day 3 we arrived for lunch at the coffee town of Santa Teresa. Lunch was followed by my first cup of coffee since leaving Cusco… very smooth, very good. This was coffee-growing small scale.

More about the Incan culture

When the Spanish arrived, they saw the Incas’ snake symbols as evil, but they weren’t. Incan culture is about balance, not good and evil, like in Catholicism.

Our guide told us how an Incan shaman, or holy person, predicted 500 years of darkness, just before the arrival of the Spanish conquistadores. The Spanish arrived in 1532, so the darkness is due to lift soon… that gives us hope in the world of today.

Around 3,000 people visit Machu Picchu every day. That’s a lot. The feeling is still very special, but I was beginning to miss the more isolated nature of the Salkantay Trek.

At Machu Picchu, you also could not get away from the legacy of US explorer Hiram Bingham, who had ‘discovered’ Machu Picchu in 1911. Maybe that should be reworded… the ‘first Westerner to discover Machu Picchu’. Bingham carted off tens of thousands of Incan treasures to his university, Yale. It took Peru 100 years to get them back.

There are two reasons to visit Aguas Calientes. Firstly, it is convenient in terms of location: a 90-minute hike or 20 minutes in the bus to Machu Picchu. Secondly, I really liked the 4-star El MaPi Hotel. I especially liked the hotel bar – a lively atmosphere. And it’s the best place to eat in town; there may be a lot of restaurants in Aguas Calientes, but there are a lot of bad ones.

For those wanting peace and quiet, away from Aguas Calientes, although my room at El MaPi was super quiet and restful, and with much, much deeper pockets the Belmond Sanctuary Lodge is the closest hotel to Machu Picchu. For me though the destination was Machu Picchu rather than a hotel.