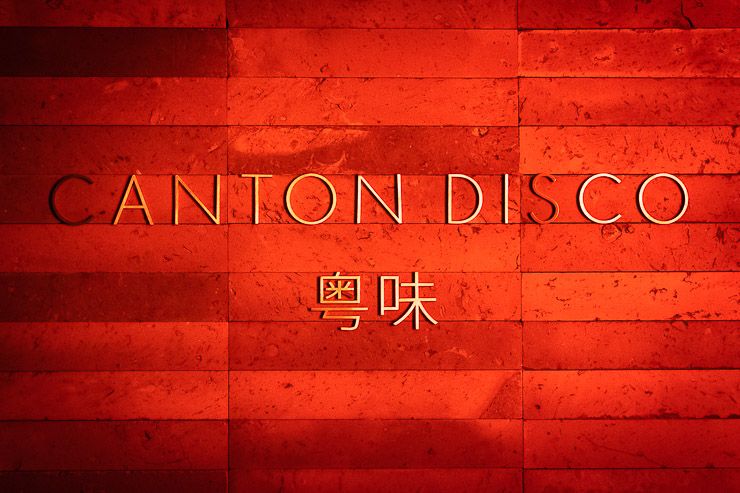 10 May Good times on The Bund: Canton Disco & more

I know when I want something in life… I can feel it in my body, whether a little whim or a big desire. When I visited Shanghai this spring, I wanted to eat at Canton Disco, opened by Taiwanese chef Jowett Yu last year in The Shanghai EDITION hotel.

I’d met Jowett three years ago, at his pop-up at Lyle’s in London. I like it when life goes in circles; when I experience a touch point with something that happened in the past.  Circles make sense of chaos, whether circles in life, the circular economy or circular rooms.

Jowitt is most renowned for Ho Lee Fook in Hong Kong, which I described in my blog post as “one of Hong Kong’s most talked-about ‘fun’ dining venues”.

Canton Disco is just as fun, and is all about the 1970s Hong Kong vibe – disco music, dark rooms, neon lights and food that throws surprises.

The Shanghai EDITION opened last year just off The Bund, at the end of Nanjing East Road, the main shopping street in Shanghai, and near the Rockbund Art Museum.

Now, I know The London EDITION. I went there a few weeks ago for champagne-tasting with Adrien Dhondt and Frédéric Savart – whose champagnes are both found in Shanghai – and I’ve eaten at Jason Atherton’s Berners Tavern.

The Shanghai EDITION, though, reflects all the vibrancy of the city itself, with a stronger energy and a stronger beat… that is what they even told me at The London EDITION!

With 9 bars and restaurants, and all sorts of fun places, including a spa and a pool, the beat of The Shanghai EDITION stretches up as far as The ROOF on the 29th floor, where there is a bar, open-air lounge, music and unrivalled views over the Huangpu River (picture at the end of my blog post). 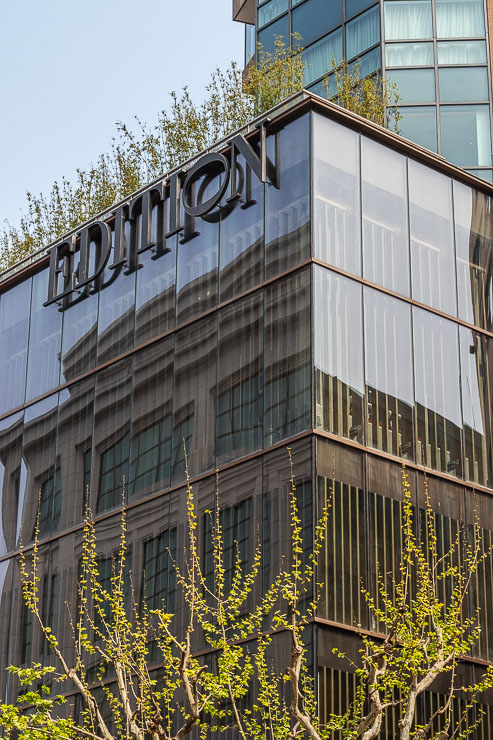 Canton Disco in The EDITION

When I arrived at Canton Disco in the early evening, the disco music – so loved by Jowett – was already in full funk and the lights low, so low that I had to max out on my camera’s ISO.

I Wanna Rock You followed by Do you Wanna Funk swept me up to disco heaven … an excellent remedy for having walked 16km across Shanghai that day. The Canton Disco people also welcomed me with open arms – I fall for good service each time.

Like at Jowett’s pop up, the menu reflects traditional Chinese with a modern zing. (Taiwanese-born Jowett lived and worked in Canada and Australia before moving to Hong Kong.) I also noticed the same Prawn Toast x Okonomiyaki on the menu that I had ordered at his London pop-up.

A little tour took me to the private dining rooms, so often the preferred way for the locals to entertain, as I had found out during my visit to Fu He Hui, Shanghai’s temple to vegetarianism…

Each private dining room had a name…

And the decor in the main restaurant was very, well, Chinese…

What I ate at Canton Disco

My little table was in a discrete corner, with plenty of space to pile my bags and my camera.

First, I went for a dim sum platter of:

I had wanted to try some Chinese wine, but the Kanaan Winery Riesling 2018, I was rightly told, would not have gone with what I had ordered. Wang Fung has been making wines since 2011 at her Kanaan Winery in Ningxia, an autonomous region in north-central China.

A trip to The ROOF

Meal over, I was encouraged to check out The ROOF… so past the neon lights, down in the lift to the lobby …

… and then up main The Shanghai EDITION tower to ROOF, on the 29th floor.

The views across to Pudong must be one of the finest – all set to the sound of music.

3 places to eat on The Bund with a view

Two blocks east from The Shanghai EDITION and you arrive at The Bund itself – a waterfront area on the western bank of the Huangpu river that was once part of the British/US Settlement until 1941. The French had their own district, called the Concession, still the hippest part of town.

The Bund is where everyone, although possibly not the coffee drinkers living in the Concession district, heads to once the sun goes down and the night lights turn on.

In the evening, The Bund is so crammed with people that, to avoid any crowd rush, a megaphone drills out pedestrian traffic instructions like a stuck vinyl… I found it calming, true wallpaper noise.

I went to Mr & Mrs Bund on my first night. It is one of four restaurants ‘created’ by Perpignan-born chef Paul Pairet in Shanghai.

Mr & Mrs Bund is in one of the signature 19th century neo-classical buildings on The Bund, with views aross the Huangpu river. I had a table by the window and ordered Vanilla Corn Soup followed by Lobster Risotto. Total cost about £30. Remember to visit the terrace.

The real gem in Pairet’s stable is UltraViolet, a three Michelin-starred restaurant with a single, ten-seater table. Here diners have a ‘figurative avant-garde, psycho taste experience‘. The set menu starts at 4,000RMB, or about £450. Even the website is an amazing experience.

Jean-Georges Vongerichten is another Frenchman, this time from Alsace, making waves in Shanghai. Jean-Georges has a string of restaurants in the US, especially in New York City, as well as Jean-Georges at The Connaught in London.

In Shanghai, there is Jean-Georges, and then Mercato, on the 6th floor at Three on the Bund. At Mercato, it is all about the organic pizzas, made in an Italian wood-burning oven… I chose a ‘speciality’ pizza, with short rib beef… the best.

M on the Bund

Founded by Australian Michelle Garnaut, M on the Bund  has been the go-to place for expats and western visitors in Shanghai since it was founded 20 years ago. It even has its own high-profile English-language LitFest. A fabulous large terrace. My non-alcoholic cocktail was very good.

A couple of blocks north, you come to the two lions that mark the entrance to the HQ of the Shanghai branch of The Hongkong & Shanghai Banking Corporation (aka HSBC) between 1923 and 1955. It is now home to the Pudong Development Bank.

If you stroke the lions, I was told it brings good luck… the roaring lion symbolises protection and the calm one security. The original lions, now safely in the Shanghai Museum, were cast in the English town of Frome.

The octagonal entrance hall is stunning. The dome is decorated with frescos depicting the 12 signs of the zodiac and eight murals representing the eight cities where HSBC had branches. It was once called the most luxurious building from the Suez Canal to the Bering Strait.

Wedding pics on The Bund

Brides wear red in China – the symbol of good luck, happiness and prosperity. It was also the colour of the dress that I had taken (hand luggage only) with me to Shanghai to go out at night.

The tradition is to have your wedding pics taken at a special ‘photo shoot’ at some symbolic location; and The Bund is just one of those.

Each night there were so many brides and bridegrooms having their pictures taken you would never have thought there had ever been a one-child policy in China. 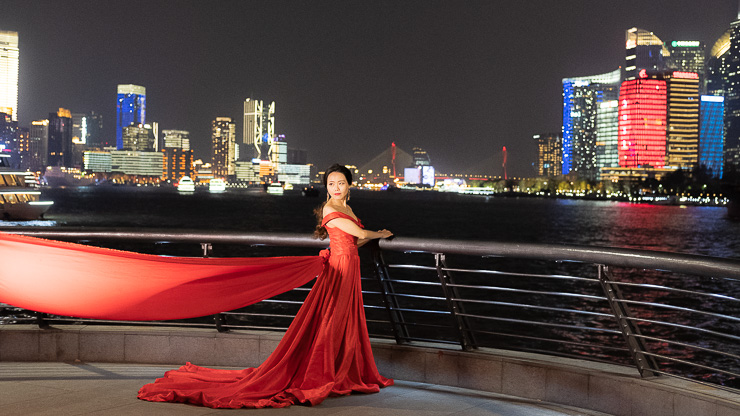 I spent about three evenings walking up and down The Bund at night… a sea of people.

As Yi and Bryan Ellis write in 101 Stories for Foreigners to Understand Chinese People, walking on crowded streets in China is like driving a bumper car … the norm is to ‘bump’ with the flow.”

By contrast, when you meet people in China: “A common greeting is a warm “hello” and a nod, but nothing more physical than shaking hands.”

What I like about travel – and it can just be within my home town of London – is that it challenges your values and how you perceive life.

I had opened a fortune cookie (a Californian invention) at Canton Disco at the end of the meal. The slip of paper read: “You can persist in difficult times and also enjoy easier times.”

That made the think – actually I would like to bring a sense of play to difficult times as well – otherwise life just gets too hard.

For tips on travelling in Shanghai. For my other blog posts on China.