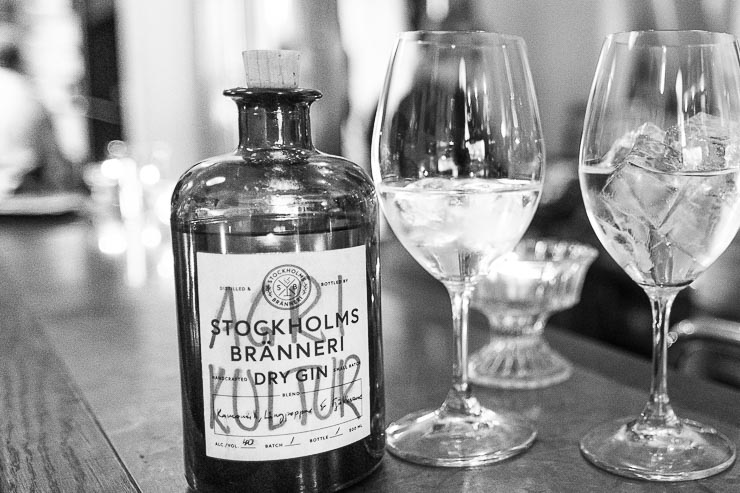 The cool place to hang out in Stockholm is the island of Sodermalm. With its roots as a working-class district, it’s also the birthplace of Hollywood icon Greta Garbo. Some of the wooden houses are still there. Now, though, it’s full of creative types, eco-friendly shops, cafés and bars … including Bar Agrikultur, one of my favourite.

There are so many places to choose for eating. I have gone for one destination for fika (or it could be breakfast), one for lunch and one for supper (with an aperitif).

Fika is the Swedish institution of breaking for a coffee (bryggkaffe – brewed coffee): for a pause to break the hustle-bustle of everyday living. Usually it’s taken with a pastry or a cake, and with friends, colleagues or family. The coffee is in a help-yourself urn. Perfect for people who like to top up.

At Bar Agrikultur, the dessert menu includes bread pudding made from Petrus cardamom buns. How decadant is that! I just had to drop into Petrus to try a bun.

Petrus Jakobsson is becoming more and more renowned in the global world of gastronomy. Shame that his book Bageriet – Bread, Pastries & Cakes, which came out last year to excellent reviews, is only in Swedish. (I’ve translated the title.)

Bageri Petrus is a tiny place, often with a queue, off Mariatorget (Maria Square). Nearby are two places renowned for roasting their own coffee – Drop Coffee and Johan & Nyström. The first is where people go to work and the second to talk and have fun – or so it seemed to me.

Back to Petrus, I went for a morgonbulle… no cinnamon or cardamom, just spelt flour, sugar, butter, yeast, milk and a bit of egg (or so I believe). It’s all about the ingredients. Especially after tasting the aged butter at Restaurant Frantzen, there is butter and there is butter… and the same goes for all the other ingredients.

For lunch – Meatballs for the People

I went to Meatballs for the People – three blocks from Bar Agrikultur – for my first meal after eating at Frantzen. Meatballs are comfort food. They even have a word for this food in Swedish – husmanskost. Here the meat is organic, the food is natural and fresh… the perfect follow-on to eating at a 3 Michelin-starred restaurant.

A map on the wall shows you where the meat comes from. I went for the venison meatballs (from the highest dot on the map), with mashed potato, lingonberries, vegetable pickles and, of course, knackebrod, the rye crispbread – the thing that Swedes miss most when they leave Sweden, I was told, and I agree!

This is a fun, light-hearted place. I sat next to a Taiwanese woman. She was travelling on her own in Finland and Sweden, and then meeting her husband in Italy. I asked her how she had found out about Meatballs for the People. “I saw it on TV,” she replied.

The room was half locals and half visitors. It’s difficult to keep things secret… and who wants to anyway – 2018 is all about inclusion and transparency, say the trend experts. And finding somewhere good for lunch – most places open just in the evening – can be difficult in Stockholm, so this is a useful place to  know… as well as Fotografiska.

Bar Agrikultur is small and intimate – a mini-restaurant, as it calls itself. They also do live music, sometimes. Music is big in Stockholm, but then it’s home to Spotify.

It opened last summer as the sister restaurant to one Michelin-starred Agrikultur, on the northern fringes of the city centre, in the district of Vasastan, not far from Ett Hem  (oh, another place I would like to eat at, if not stay!)

The Bar overlooks Nytogret Square, in SoFo, the blocks south of Folkungagatan street, rather than NoFo, which is everything north. It was in the early 2000s that some creative types came up with such hip-sounding names, to reflect SoHo of New York. But then Stockholm is hip.

‘Food, flavour, sustainability and community’ – seasonal, Swedish produce… that’s what Bar Agrikultur and Agrikultur are about. Agrikultur offers one five-course menu at Skr885 (£76/US$108) and 24 seats.

Bar Agrikultur is walk-in only… a real bonus as good restaurants in Stockholm get booked up very quickly. It has a short menu with lots of tempting dishes and made up of nibbles, small courses, meat on skewers and desserts. There’s a dry-aged meat cabinet behind the bar. Not the first time I had seen this in Stockholm. It must be a Swedish thing.

And what fun I had! The community element is strong. I sat myself down in the prime position where the bar curved round, just by the door, with a thick curtain shielding us from the snowy weather outside.

The bar filled up quickly 30 minutes after opening at 5pm (it was Friday evening). That was enough time for me to establish that the man who was serving me was co-founder and owner, Joel Åhlin. That made my visit all the more personal. And, I was sitting next to his brother! I became all groupie like and asked Joel if I could take a picture of him.

For me, that is the beauty of travel – these chance encounters which spark special moments that help open your eyes to the world.

The gin at Bar Agrikultur

I was tempted by the wine  list … the champagne is from R Pouillon et Fils and there was a Burgundy from Claire Naudin. I have met both Fabrice Pouillon and Claire Naudin while taking photographs for Clos Driver Wine Tours, and I’ve had the privilege of tasting what they make – more special moments from chance encounters.

I just could not square with drinking French wine in Sweden. So I went for the Bar Agrikultur gin. This is no ordinary gin. It is organic dry gin from Stockholms Bränneri, the city’s first craft gin distillery and located on nearby Folkungagatan.

Bar Agrikultur infuses the gin in tanks sitting behind the bar. I sampled both infusions. One was with caraway, dill flowers, hops and lemon verbena (my favourite). Caraway and dill are both found in aquavit, Sweden’s more traditional spirit. And the other was with chamomile, long pepper and angelica root. I drink my gin with soda water, or even sparkling water as I don’t like the quinine taste of tonic.

I went for two small dishes…Skrei Cod with Cabbage and Shellfish Bisque, Onion & Potato. Skrei cod is a male cod caught on his way to spawn in the North Atlantic; it was  something I’d never tasted before – akin to the taste and firmness of scallops, as Joel pointed out. Something to be repeated.

I followed this with Jerusalem Artichoke, Burnt Cream, Miso & Flower Shoots. Equally stunning! With two gins, low lighting and lots of camaraderie, the photography got relegated!

Also on the menu was Wrångebäck Cheese with Quince Marmalade & Bread (Petrus, I presume). I had bought some Wrångebäck cheese earlier that day to take home from the Urban Deli, also in Sodermalm – I had asked for a small producer, Swedish cheese, and this is what they suggested. The cheese is made from unpasteurised cow’s milk on a farm on lake Vättern, between Stockholm and Gothenberg.

And, of course, the bread pudding made from buns from Bageri Petrus and whipped cream.

Then it was a 20-minute walk back to where I was staying on Skeppsholmem island… in the snow. That was my magical last evening in Stockholm.

For art and photography lovers, I would recommend Galleri Axel, which features in the Sodermalm walk in the Monocle Guide to Stockholm – my favourite guide books.

A tiny photography gallery, there’s usually an interesting exhibition of a local artist. A must for photography lovers, and a contrast in scale from nearby Fotografiska… Fotografiska is also on Sodermalm, a short walk from SoFo, and then a flight of stairs down to the waterfront.

For next time… Folii Wine Bar

Folii Wine Bar was opened last year by Jonas Sandberg, a former restaurant manager at Fäviken (one of Sweden’s most famous restaurants and an 8-hour drive north of Stockholm), and sommelier Béatrice Becher. Like Bar Agrikultur, it is walk in only. The wine is natural, biodynamic… and cigars also available! Swedes like natural wine.

For all my stories on Stockholm.