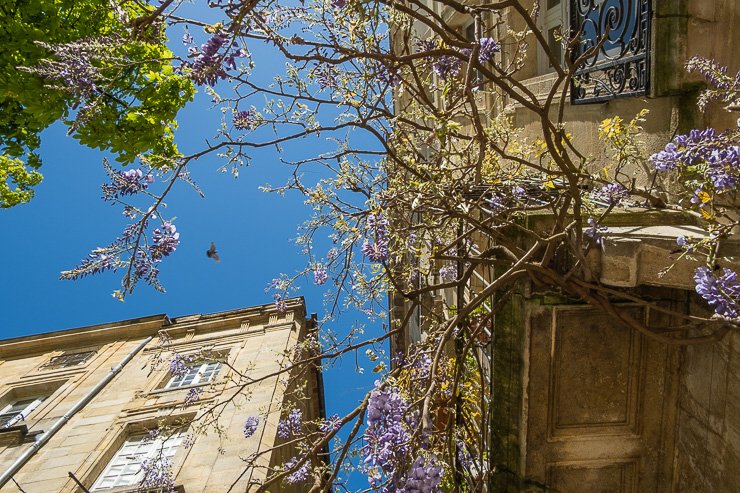 23 Apr Solo in Bordeaux for 2 days

A mere two hours south west of Paris by train, Bordeaux is a cool contender for a weekend break by the water. Even the city’s very name reflects ‘au bord de l’eau’ – the French phrase for ‘by the water’.

When I took the Ouigo train service (the state railway company’s low-cast option) down from Paris this April, I spent an additional €7 each way for a seat on my own by the window – a luxury for the solo traveller, and money well spent.

Bordeaux is a city designed for people

Despite the Parisians telling me that the bordelais were bourgeois, I found the locals open and friendly. Our urban environment have the power to affect how we feel and how we behave, and I can imagine that living in Bordeaux is a pleasant experience :..

The CAPC Museum of Contemporary Art in Bordeaux is well worth the visit to revel in the high arches (inspired by Italian design) of this converted warehouse (used in the 19th century to store tropical goods such as coffee and spices before export to Northern Europe)… and there’s a café on the rooftop. Architectural fans may also be interested in visiting the MÉCA cultural centre by the Saint Jean train station.

THE GOTHIC QUARTER: Saints are everywhere in Bordeaux… and so are churches. Here is the 14th century church of Saint-Pierre. The historic Gothic district of Saint-Pierre is a warren of streets and old, stone houses…. together with ice-cream shops, restaurants and terrace cafés. Think Barcelona’s Barrí Gotic, but more for the locals.

BEST PASTRIES & COFFEE: I went to La P’tite Boulangerie, opposite the church of Notre Dame in the Chartrons district, twice a day, for breakfast and then a savoury takeaway. My favourites were the canalé (the local rum baba-like speciality), the chausson de pomme (apple turnovers), and the olive & thyme baguette. For coffee, I went opposite, to La Pelle Café, who roast their own beans. A café lungo (an espresso + some hot water) and freshly squeezed orange juice is always the best way to start the day. Favourite local stores were the MAT Green Concept store (where I bought my son some socks) and for household goods, Coutume.

A fish lunch in the Gothic district of Saint-Pierre

For my LUNCH at Le Petit Commerce, in the Saint-Pierre district, I had x6 Les Joyeuses Piraillan oysters from nearby Cap Ferrat – a favourite haunt of the ultra-wealthy and famous. My excitement then ran away with me (so much fish is farmed nowadays, and here the fish is brought in twice a week from the nearby port of Arcachon). I then had fish soup followed by grilled mackerel. This is an unpretentious restaurant, with formica table tops … it’s all about the fish.

A walk along the river to the Bataclan district

WALKING DOWNSTREAM: La Cité du Vin is a 40-minute walk downstream along the Garonne from the city centre, and across the road from Les Halles du Bataclan. I did this walk for both days that I was in Bordeaux – one time also stopping off to buy some Basque Moutet tea towels from the store Echoppe de La Lune (perfect for edible presents). Une échoppe is a typical, single-storey bordelais house.

Les Halles Bataclan is a modern, covered market crammed with food & drink stalls, with people then taking their drinks and plates of food to sit outside.. The music was upbeat and the energy vibrant. I only wished I had had an ice cream from the local Baltoro – the ice cream is made from organic milk from a farm in Gironde, and the packaging is fully compostable…. and so on. Of course it is cool here as Ubisoft the video games maker has an office with 400 engineers and game designers across what was once a submarine pen.

A ‘natural’ meal for when you have Soif

For my second lunch I went to Soif, a natural wine bar in the Gothic district of Saint-Pierre. I had already checked it out during the evening, when it was heaving with locals. J’ai soif means ‘I’m thirsty’ in French.

I started with white asparagus, followed this with hand-dived scallops from Perros-Guirec in Britanny, cooked with new turnips, peas and tricandilles grillés (grilled tripe – yes, it’s good!) For a glass of wine, I went for a white sauvignon from nearby Charente – La Versaine – La Part aux Groles. There’s not much natural wine from Bordeaux – too many big estates.

The bread came from Boulangerie Anton – on my map for my next visit to Bordeaux; for this time, I felt hesitant to walk out of the traffic-free central area for my morning pastry. Having no cars in the street was a luxury that I was enjoying.

3 things for next time in Bordeaux

Are you visiting France? You may be interested in my posts from Paris, Champagne, Antibes and Strasbourg.