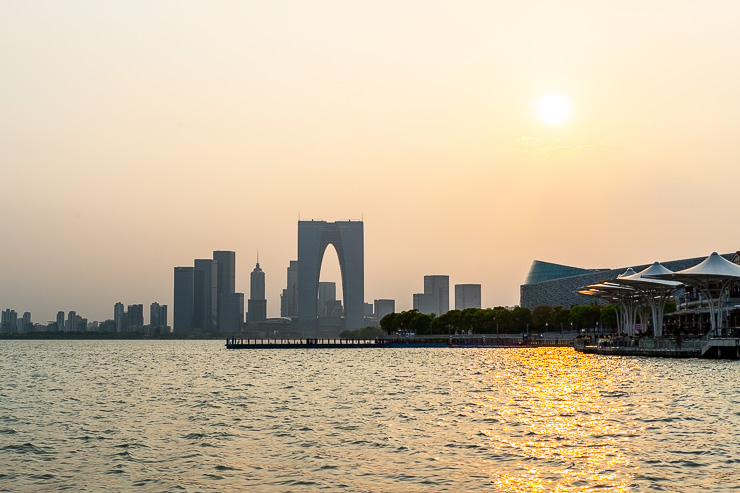 15 May Suzhou: a day trip from Shanghai

I made the 110 km journey from Shanghai to the city of Suzhou in 25 minutes. China’s high-speed trains are a marvel. As British poet John Betjeman wrote: “Trains are made for meditation”.

Betjeman was writing in 1940, in the age of steam, but that meditative effect of trains lives on… as long as the train is not too crowded or noisy, which the train to Suzhou was not.

Suzhou, on the Yangtze Delta Plain, is famous for:

I had hoped to see some wild, natural landscape in between Shanghai and Suzhou, but no, not to be – not in a country of 1.4 billion. If you’ve been to the cities of China, you’ll never complain about crowds in London or Paris again.

The gardens are beautiful – a homage to over 2,000 years of Chinese landscape garden design, says UNESCO.

The crowds are not so beautiful. To ‘feel’ beauty, I like near silence.  The gardens of Suzhou are one of the top spots for Chinese tourists, with their flag-toting guides.

A day visit only gave us time to visit the Lion Grove Garden, built by a Cha’an Buddhist monk (China’s equivalent to Zen Buddhism) in the 14th century.

I was visiting with my two guides from the hostel and a fellow Swiss traveller. We lost the guides a couple of times, so we got them to write in our phones in Mandarin: “I am lost. Please can you ring my guide. Her number is ….”

The first time we lost them, the garden officials very kindly allowed me to make a public announcement to all the hundreds of people in the Lion Grove Garden. Would this happen in the UK? I doubt it.

I did spot one …  sketching quietly by the flowering wisteria. The young generation is different – they don’t follow flag-toting guides.

For a good read, I would recommend Karoline Kan’s book Under Red Skies, charting three generations of women in China

The Lion Grove Garden is famous for its grotto of lion-shaped taihu rocks, a local limestone. Taihu is one of four stones venerated in China. The other three are Lingbi and Ying, and Kun, also from the Suzhou region.

The philosophical worshiping of rocks or stones in China – officially called petrofilia – is about learning to respect the dignity of what has been marked by ageing and time, and the mighty forces of the universe.

Why do we only eat apples & oranges?

In the Anglo world, the diet is so restricted. Fruit is apples, oranges & bananas. I couldn’t resist this fruit on the street. What was it? I have no idea. The purply-black fruit was like a mixture between a grape and a sweet plum, and the yellow-white one was almost pure sugar.

For lunch, we headed to Pingjian Road, a pedestrianised street running along one of the many canals. It has been around since the Song Dynasty (960-1279).

We found Dream of Taoyuan (a region in Taiwan) for lunch. The wait was worth it.

MSG is sprinkled liberally into food in China. Here I managed to find a MSG-free dish of noodles and vegetables, followed by some kind of red bean sweet soup.

Chinese Millennials love pink, including for the inbuilt hand warmers on this scooter… evidence that temperatures get down to 0oC in winter.

Well they always say Millennials like experiences, and nowhere less so than in Suzhou, where the young women seemed to love dressing up in traditional clothing and going for a walk.

When you travel with guides, you never really know where you are going… we walked, we took the subway, and then we passed this bread stand.

Who were these people, whose faces were not like the Han Chinese in Eastern China? My guides told me they were from the ‘minorities’. Checking back with friends in London, they were probably from Xinjiang … ‘they are Euroasians’, I was told. Whoever they were, they were also Chinese.

Their bread was delicious… cooked on a hot plate like the ones used to make crêpes and galettes in France.

I asked for my bread to not be put straight off the hot plate and into a blue (I am sure not recyclable) plastic bag… and it was… I whipped it out pretty quick.

When you visit the gardens and Pingjian Road, you can be excused for thinking that Suzhou is a small historic city. The reality is that it is a city of more than 10 million.

We crossed the city by foot and metro to arrive at Lake Tai, formed, it is said, by a falling meteor.

It was here that back in 826 CE that Bai Juyi, a famous poet and Prefect of Suzhou, came across a pair of oddly-shaped rocks as he was taking a stroll by the waters.

He took the rocks back to Suzhou, where he wrote a poem, A Pair of Rocks – the founding moment of the Chinese veneration of stones.

Lake Tai is where everyone goes for the sunset.

Cafés and restaurants line the shore, with the view across to Suzhou’s tallest building, the Gate of the Orient, a 301-metre high, in the central business district. The English media said it looked like a pair of trousers. So what!

With the sun down, we walked through this modern neighbourhood, where, once again, like on the Bund in Shanghai, the brides were out having their photos taken. Suzhou is famous for being home to the most beautiful women in China, a Chinese friend told me.

On the way back to the train station, our guides got us thoroughly lost, but they were such lovely people I forgave them.

So many walked kilometres on busy roads meant breathing in more than my fair share of city pollution… and I had forgotten my pollution mask that I had bought from my favourite shop in China, MINISO.

My visit to Shanghai and Suzhou made me so acutely aware of pollution that on returning home I replaced my polluting gas hob with an induction one. It was about the same price as my trip to Shanghai.

For tips on travelling in Shanghai. For my other posts on China.