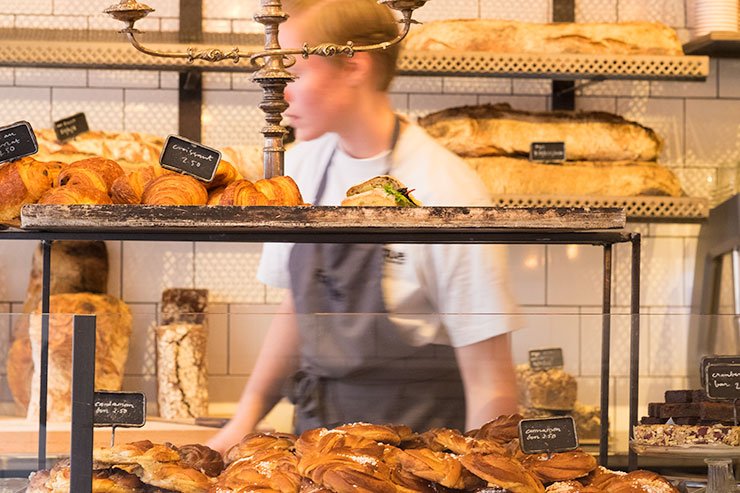 Swedish people eat the equivalent in cake & pastries of 316 cinnamon buns a year, & that doesn’t include what they bake at home. I found some excellent cinnamon buns, and stopped for a Swedish coffee time, or fika, at Fabrique Stenugnsbageri, or bakery, in London’s Covent Garden.

Fika is the third most useful word to learn when visiting Sweden, after tack (thank you) and hej (hello). As Magnus Nilsson, Head Chef of Faäviken, one of the world’s 50 best restaurants, writes in his 768-page The Nordic Cook Book: “It is a cherished time to spend with friends, colleagues or just on your own.”

Nilsson has fika twice a day, but his father will fika 7 times a day, starting with a pre-breakfast fika in solitude; fika is both a verb & a noun.

So I went to Fabrique to fika, having discovered their cinnamon buns, or kanelbullar, at Monocle Café in Marylebone. These buns are so popular in Sweden that there’s even a Cinnamon Bun Day on 4 October.

Then there’s the ‘hipster’ version, the cardamom bun, or kardemummabulla… even better, with the cardamom adding a peppery, citrusy taste.

Fabrique’s buns ooze sugar & butter. They are substantial in a satisfying rather than a filling way. But it’s OK, as butter is now said to be good for us & sugar is such a great feel-good treat as long as it’s now and again, says I.

SOURDOUGH BAKED IN A STONE OVEN

Fabrique bakes their bread in a stone oven using a mix of sourdough, time, and tender loving care, as they say… and they sure do.

What I ate here for my afternoon coffee-time was of vastly superior in quality to the afternoon tea that I had recently been served in a not-to-be-named London 5-star hotel.

WHAT I ATE & TOOK OUT

The coffee was the traditional bryggkafee, or brew coffee, a filter coffee taken with or without milk.

At Fabrique, the coffee is served in chunky, etched glasses, reminiscent of Scandinavian Christmas decorations… a Fabrique ‘innovation’ rather than a Swedish tradition.

The music was jazz, the Swedish waitress was warm, chirpy & pleasant, & cool-looking people, people in the know, came & went for buns, while two Swedish women sat chatting in the corner. It was a very pleasant way to spend an hour in the afternoon.

Fabrique has 11 bakeries in Sweden, as well as in Shoreditch and a new one in Notting Hill.

For my blog posts on my visit to Stockholm and all things Swedish.