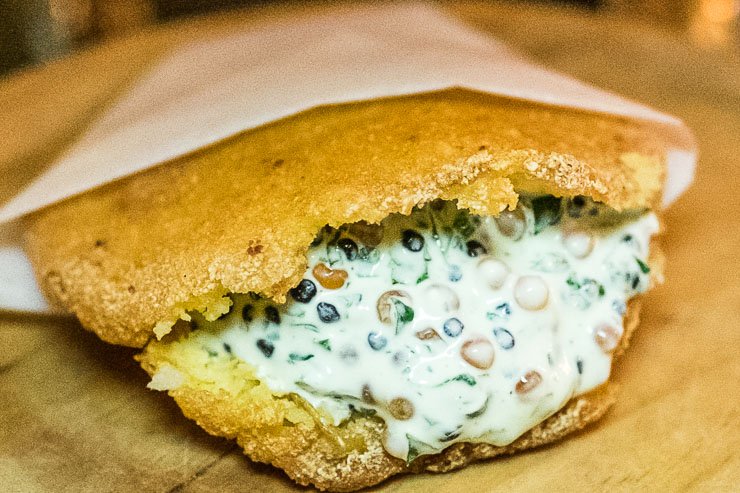 A multi-cultural evening was ahead of us: Venezuelan Karlos Ponte of Taller in Copenhagen cooking alongside Ollie Templeton of Carousel in London.

There were no cinnamon buns, but there was plenty of that cosy hygge (hoo-guh) feeling blended with a Venezuelan vibe.

Karlos has worked for some impressive restaurants: El Bulli, the birthplace of molecular gastronomy & now a foundation, in Catalonia, followed by Noma in Copenhagen, one of the world’s top 5 restaurants. He then opened Taller with fellow Noma chef Jacob Lauridsen.

My experience of Venezuela

First a note on Taller’s website. It’s one of my favourite. It makes me dream; with Venezuelan drum music and a video so sensuous that it makes me want to pack my bags & go and live in Venezuela.

I read the UK Foreign Office advice on travel to Venezuela, and then decided not to go. I went once, to Caracas, in transit to Cartagena, with a Cypriot friend. We were detained for an hour at the airport for no reason; they kept on looking at her passport. Luckily they decided to let us go, just in time to run to get our connecting flight. For the return journey, we had the business card of a Colombian senator – a friend’s uncle – in case there was a hiccup, but there wasn’t. I don’t usually have such contacts.

It’s a huge shame that Venezuela is a no-go zone at the moment as the country seems to have so much to offer. It’s tropical. It’s Caribbean. It’s Andean.  I asked Karlos whether he found Denmark cold. He said ‘no’, because he came from the mountains, from the Andes.

I was in love with a Venezuelan at one time: an architect who lived in Paris. The love wasn’t reciprocal. With hindsight, I was probably more smitten with his loft apartment in the 5th arrondissement and the farm in Venezuela than I was by him.

And I have a Venezuelan friend in London who when I asked him about Venezuelan food, replied: “It’s rich in flavour.” He then started to reminisce about eating arepas for breakfast.  When I sent him a photo of the arepa served that night at Carousel, the reply was … “OMG, I want one! I desire to eat arepa!”

This was my second visit to Carousel. The first was to sample the food of Industry Standard, a Berlin restaurant started by Mexican-born Ramses Manneck.

Carousel is, eh, like a carousel, with a constant merry-go-round of visiting up-and-coming and ‘up’ chefs. I can’t afford to eat at Noma, but I can afford to eat at Carousel. This week it’s the turn of Gísli Matthías Auðunsson, whose Slippurinn restaurant is on an island off the south coast of Iceland – another place to dream about.

The ‘space’, as it’s not just a restaurant, offers all sorts of experiences apart from eating & drinking, from perfume making to acoustic music sessions & yoga. It’s the brain-child of four cousins, one of them who’s Ollie.

Taller is Spanish for ‘workshop’ … and this was to be reflected in the mix of tastes and flavours that we had last week – a reflection no doubt of Karlos’ time at El Bulli and Noma, and of his Venezuelan roots.

First up were Jersey Oysters with Mango, Yazu & Angostura Granita, to be knocked back with a small glass of the Venezuelan rum Diplomatico with lime pickle.

For those who don’t know, Angostura bitters originated in the Venezuelan town of Angostura, now Ciudad Bolívar. The bitters were invented by a German surgeon-general to Latin American ‘liberator’ Simón Bolívar.

I took the wine pairing. First up was Casa Belfi’s Prosecco Colfondo.  I usually prefer Franciacorta, and turn my nose up at Prosecco. I liked this Prosecco & it was as natural as it comes.

Now Taller in Denmark serves two of my favourite champagnes, L’Artiste and L’Apôtre by David Léclapart. I had photographed this artisan producer when I was in Champagne last year doing photos for luxury wine tour operator Clos Driver. I judge a restaurant by its champagne list, so I had been keen to eat at Taller in London.

The prosecco – it was not me who drank all the bottle – was to go with the Langoustine, Cape Gooseberry, Turnip & Butternut Squash.

Next up was Black Lentil Noodles, Egg Yolk & Vegetable Bouillon, accompanied by an Austrian Riesling. Yes, it’s one of those dishes that you have to stir in the egg yolk.

Then came the arepa, as in the featured image. Arepas are as Venezuelan as you get and were made by the original Indian inhabitants of the country. The ‘pastry’ is made from corn. They can have a variety of fillings: Taller’s arepas were with Chicken Skin, Trout Roe & Lardo, & paired with an Austrian Grüner Veltliner.

The main course was Lamb with Cassava Root accompanied by Guasacaca, a typical Venezuelan sauce made with avocado, parsley, coriander, vinegar, lime juice, garlic and onion.

Karlos had explained how cassava is basic to Venezuelan cooking. The charred exterior was a lovely contrast to the mushiness of the inside. Served with a Côte du Rhône.

Another key ingredient in Venezuela is chocolate. So dessert rightly was Cacao Ganache with Frozen Buttermilk. Karlos came round with a small, steaming saucepan, from which he poured the buttermilk frozen with liquid nitrogen to produce a creamy consistency.

The dessert wine was a Barbaresco Chinato, so a nebbiolo, made by Mauro Vergano in Piemonte. It is infused with quinine bark, cinnamon, cloves, cardamom, coriander, bay, ginseng and rhubarb – perfect to accompany chocolate.

My final note on Taller and Venezuela is that Denmark is very lucky to be home to such a restaurant. I’m now just waiting for Venezuela’s politicians to ‘sort things out’ to visit a part of the world that for me seems like paradise.

Now Carousel offers some pretty stunning cocktails. I had one last time & I didn’t have one this time, as I wanted to make sure that I got home safely with camera and umbrella in tow. With a set sit-down time for the visiting chef events at 7.30, a cocktail is the perfect way to fire off the evening.

Where to find them