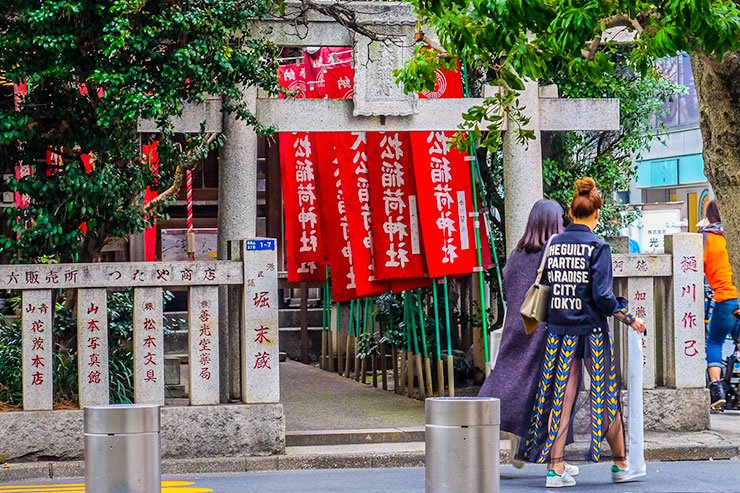 In 2015, I spent ten days in Japan discovering the local tea culture, and I remember every moment vividly. But ask me what I did yesterday, as we huddle in our homes from the pandemic, and I have to think hard.

“Our brains record new places with a particular vividness,” writes Tim Harford in the Financial Times.  His article was inspired by Mind in Motion: How Action Shapes Thought by psychologist Barbara Tversky, who believes that our minds are built on a foundation of “cognition about space, place and movement”.

My sensation of “space, place and movement” during my trip to Japan was further heightened by visiting during cherry blossom or sakura season. It was as if my journey had been timed perfectly as I travelled down the spine of the country, catching the opening of the blossom on my way – Tokyo, the Nakasendo Trail, Osaka and then Kyoto.

Five years on, and as we head into autumn, I only wish I could be in Japan to catch the tawny autumn colours, for which the country is so famous. In the meantime, I keep myself linked to all that is Japanese by:

10 years to become a matcha master

Like Tokyo, the largest city in the world, with over 2,300 subway and train stations, the Japanese tea culture is intricate and complex, but meticulously ordered and ritualised. Everything is at the right pace, the right temperature, the right ceramic and the right setting – traditionally in a tea house overlooking a lake, set in a Japanese garden … check out Yoko Kawaguchi’s book Japanese Zen Gardens to get the idea.

It takes 10 years to become a Master at one of Japan’s three main schools of matcha, the country’s famed powdered green tea, considered the king of teas. Things are done with passion, skill and commitment in Japan.

My experience at Ishikawa

“Tea is like water for us,” summed up my dapper Japanese neighbour – who was born in Manchuria in the 1930s and had learnt his very posh English from a Cambridge university tutor.

Together with six other diners, we were perched at the counter of the three-Michelin star Ishikawa restaurant in Tokyo’s Shinjuku district. Sitting at a counter is all the better for talking with the chef, for seeing the food prepared and creating an intimate atmosphere. Ishikawa is a kaiseki restaurant, the name for a typical Japanese restaurant serving a multi-course meal from a set menu.

I had asked my new friend – who was with his wife, who did not speak English – why Tokyo was so full of coffee shops, or kissaten, as the traditional coffee shops are called. Tea was prepared and served at home, he said, whereas coffee was something special, something different.

The restaurant is owned by chef Hideki Ishikawa. Like in Italy, you actually find restaurant owners at the helm of their own restaurants – a rare find in London. Hideki greeted me as I went in and showed me to the door at the end of the evening – presenting me with a doggy bag of my leftover rice for my plane trip back to London the next day. A wish that I had expressed whimsically, and that had become a reality.

Each year Hideki would take his whole team to a different destination, to discover new things. This year they were going to Okinawa, a prefecture of about 150 islands between the Japan mainland and Taiwan.

Ishikawa, a three-star Michelin kaiseki restaurant in Shinjuku, Tokyo, owned and operated by chef Hideki Ishikawa. I sat at the bar in-between a couple from Shanghai and two couples from Tokyo.

Tea: on the path to enlightenment

From Tokyo, I went on a three-day self-guided trek along the Nakasendo Trail, an ancient route through the mountains linking Kyoto with Tokyo dating back to the Edo period of the 17th-19th centuries.

I then spent one night in Osaka, at the Cross Hotel, a fun, stylish hotel across the bridge from Dotonbori, a street teaming with restaurants and life. While in Osaka – you can feel that it is a port city – I highly recommend the typical local street food of takoyaki (octopus balls) and a visit to the nearby Kousomo food market.

The next day I travelled to Kyoto, the ancient capital of Japan. It was here that I experienced my enlightenment to life and all things tea: at the Shunko-In Temple & Guesthouse.

At Shunko-in, I stayed in a big empty room. Each evening, I would roll out my tatami mat, and roll it up the next morning, before the optional morning meditation, followed by tea and wagashi, of course.

Sitting in the half-lotus position, breathing in for the count of five and out for tne, overlooking the temple garden, it struck me, as my thoughts wandered, that tea was part of a holistic Japanese culture. This was a culture that encouraged the emptying of the mind to achieve enlightenment, whether through following Zen Buddhism – which in Japan is heavily steeped in original Shinto religion – gazing in wonder at the world-famous temple gardens… or being served a cup of matcha tea.

Shunko-In Temple & Guesthouse in the outskirts of Kyoto – one of my many highlights from Japan, especially the morning meditation. The monk who took it spoke fluent English, as he had lived in the US.

In my travels, the four main teas that I was offered, at different times and different places,  were matcha, gyokuro, sencha & houjicha.

At the Ishikawa restaurant in Tokyo, houjicha was served with a course of steamed rice with Japanese duck and green peas, together with miso soup and pickled vegetables – and a glass of sake, of course.

I was also served houjicha with my gohei-moichi, a local speciality of grilled rice balls coated with a walnut and miso paste in a café in the beautify village of Magome, with its little wooden house and which is at the start of my trek along the Nakasendo Trail.

Gohei-moichi & tea in Magome, at the start of the Nakasendo Trail. I walked the trail for three full days, staying in various inns or ryokans along the way, arranged through Oku Japan.

Kyoto has over 1,600 temples and 400 shrines. The city is steeped in tea culture, given its ancient history and proximity to the famous Uji tea-growing district.

Up in the outlaying Arashiyama district, famous for its bamboo grove, I came across a shop where the shop owner was steaming his own tea leaves, and then massaging them, ready for drinking.

Home-steamed tea in a ceramic shop in the Arashiyama district of Kyoto. This wasn’t for the customers, but for the man who owned the shop. I still use my two cups I bought from here.

It was in Kyoto, in the central, modern district, that I attended my first and only tea ceremony, at the Fukujuen tea store. Yes, it was for tourists, but it was as authentic as I was going to find… unless I had found myself at a wedding, which was unlikely.  The price was 2,700 Yen, or £15, and I was the only person taking part.

My hostess and guide at the tea ceremony at Fukujuen in Kyoto. Informative rather than authentic, but I would have needed to be invited to a wedding for that.

The view from my bathroom at Claska Hotel, a boutique hotel in the Tokyo ‘design’ neighbourhood of Meguro-ku. I also stayed at Shibuya Granbell Hotel, good price, small, well located.

How a restaurant looks from the outside can be deceptive in Japan. I loved this place near Claska Hotel. I never knew the name. I shared sake at the bar with my neighbours. The chef made food from the soul.

My travels from home in 2020. It is amazing how far you can get with a screen. Here I am learning about the art of manga from a Japan House London masterclass.

For my next visit to Japan

Did you know that Peru has one of the largest Japanese populations outside Japan? There is even a special Japanese-Peruvian style of cooking, called nikkei. When I was in Lima, I ate at Maido, a Michelin-starred nikkei restaurant and crowned the best restaurant in Latin America in 2019.

I took the pictures in this post in spring 2015, unless indicated. In my blog, I look to have no more than 150 carefully curated posts. When life comes round again, I revisit, respark & repost them. I also recheck all recommendations.