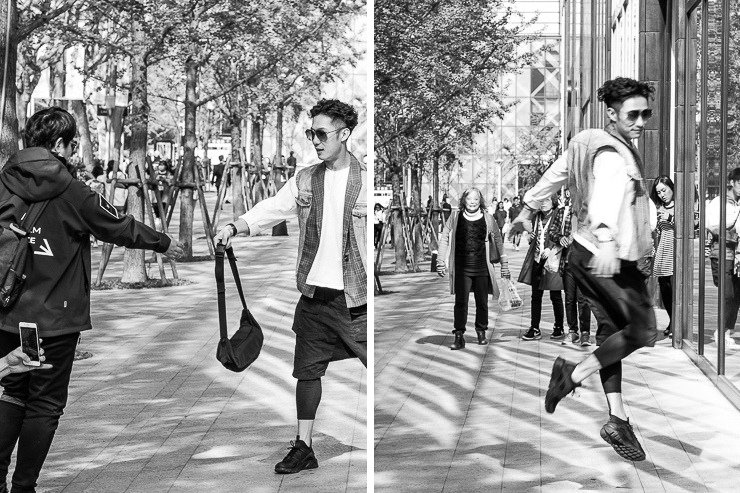 Shanghai has a buzz and a vibrancy that befits the world’s biggest city. As many people as in all of Australia live in this city, once known as the Paris of the East. The Shanghainese parade their love of style and glamour through the streets, while restaurants everywhere are full of life… music also is pretty much a constant..

I spent a week in Shanghai this April, and loved every minute of it.

To travel into Shanghai from Pudong international airport take the metro line 2 to People’s Square, with a change at Guanlang Road. It takes about 1 hour 10 minutes and costs a mere RMB 7 (80p or US$1.04).

The 431kph Maglev airport train, the world’s fastest commercial train, from the airport to Longyang Road station is quicker than the metro, but even with the discount on showing your boarding pass it costs RMB 30.

The Shanghai metro is super easy to navigate. Everything is in Chinese and English. The machines give change for coins or notes under RMB 100 – and there is always the metro’s service centre if you need to split a RMB 100 note.

For a smooth journey, all you need to know is: 1. Your station destination. 2. The number of the metro line. 3. The last stop on the metro line in the direction that you are going. 4. The exit number at your destination (preferred). It works just like the Paris metro.

I highly recommend buying Insight Guides Flexi Map of Shanghai …a plastic-coated, fold-up map easily held in the hand. The A-Z street guide to central Shanghai and the metro map on the back are especially useful.

For the cautious types, ask a Chinese speaker to locate where you want to go on Baidu Maps in Chinese, and then take a picture of the screen. From my experience, people are far more likely to know where somewhere is if they see it on a map. An address written in Chinese is second best.

Be prepared for when people don’t know how to get to your destination, even though they might try to help you.

Bicycles and motorbikes throng the city, especially in the downtown commercial districts. Be very careful crossing the road as, unlike the cars, they don’t stop at the pedestrian crossings, and they appear to come from all directions.

For the brave, bike-sharing apps MoBoke and Ofu both have English-language version apps…. not that I was prepared to give it a go!

A city for walking & foot massages

I walked 110km over seven days during my stay in Shanghai. Thank goodness for my Maison Margiela Replica trainers!

For the last three evenings, I went for a foot massage near Dashijie station on metro line 13. The one-hour or so session cost RMB 88 (£10 or US$13). If you go for a massage at one of the luxury hotels, be prepared to pay ten times this amount. As always, I take my own oil.

No one wore luxury down at my massage parlour. Instead, the TV bellowed out the noise of shooting and shouting, the stairs creaked, the young guy sitting next to me was watching American baseball on his phone, and a couple of ladies were curled up on the empty armchairs having a nap.

As everywhere else in China, locals rarely tip. Such a relief! I can’t abide the dilemma of not knowing what to leave as a tip.

By law, individual private rooms in massage parlours, completely secluded from the public area, are not allowed. I read this in the very interesting, albeit very Americanised, book 101 Stories for Foreigners to Understand Chinese People by Yi S Ellis and Bryan D Ellis.

A few words in Mandarin, and a smile, get you quite far. I never learnt any words in the local Shanghainese dialect. Remember, people don’t shake hands in China, let alone hug or kiss. My most used Mandarin phrases were:

Japan is on the other side of the East China Sea from Shanghai. There are direct flights from Shanghai to Tokyo, Osaka, Fukuoka, Nagoya and Sendai . Osaka is a mere 2h 15min flight away, with 19 flights daily. I have a theory that this might also work out cheaper than flying direct to Japan from London.

China is almost a cashless society. However, I took lots of cash as you probably have to be a local to pay by WeChat or AliPay, which is what is used by everyone, including street vendors. I used my Mastercard a couple of times, but once it did not work. There are plenty of ATMs, but I never had to use one.

Yes, the big European cities, such as London and Paris, are polluted, but nothing like Shanghai.

I panicked the first day, wondering how my lungs would cope with seven days of toxins. Luckily, our bodies are remarkably adaptive and I am sure the stress from worry had a more damaging effect on my health than the pollution itself.

On day 2, I bought a mask – one that you can wash – from my favourite shop in Shanghai, MINISO, a Japanese retail chain founded by Miyake Junya, who went to the same fashion college as Kenzo and Yohji Yamamoto.

MINISO is cuter than Muji, and you can find most things, from earphones to socks.

Did I wear my mask? Now and again. But I liked the feeling of having it in my bag, just in case of need. The appeal for me was more as a fashion rather than a health accessory.

My other posts on Shanghai