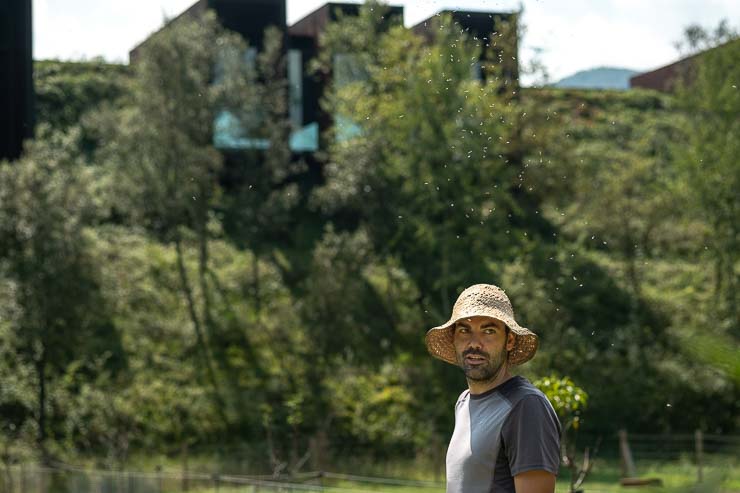 11 Sep The vegetable garden at Les Cols in the Garrotxa

My dream to visit Les Cols first arose last November when a gallery director at Paris Photo showed me pictures of this Michelin-starred gem in Catalonia’s Garrotxa Natural Park, a green area of rivers and springs, and sleeping volcanoes.

The restaurant is on the ground floor of the eponymous 15th century family masia, or farmhouse, where chef and owner of Les Cols, Fina Puigdevall was born. Symbolically, the ground floor was where the family traditionally kept the animals, with their warmth rising to heat the rest of the house.

You can also stay at neighbouring Les Cols Pavellons, and take a picnic into the woods or enjoy the picnic under the stars – but that’s a whole nother story!

That’s why Fina is my kind of person. She also speaks to apples – the old, local varieties of apples found in the farmhouse orchards of the Garrotxa. I discovered this in the video by Fina’s long-time friend, Spanish film director Isabel Coixet. “Perhaps because her grandmother went to school with Salvador Dalí. Or maybe just because she likes speaking to apples,” the video explains.

Les Cols in the Garrotxa

Les Cols is an experience that nourishes the heart, the soul, the mind, through all the senses. I can only liken it to my experience at Central Restaurant in Lima, which also, like Les Cols, has an R&D centre, or an I&D centre in Catalan.

Les Cols I&D centre is at Casa Horitzó, together with the Hort Les Cols, the Les Cols vegetable garden, in the Vall de Bianya, a valley a few minutes’ drive from the restaurant, hidden in the forest, down a windy lane.

I have divided my visit to Les Cols into two blog posts – one about my tour of the Hort Les Cols and the Casa Hortizó, a striking, modern house on an escarpment that overlooks the vegetable garden on one side and across the fields to the wooded hills on the other.

The second blog post, to follow, is about my lunch experience at Restaurant Les Cols, on the outer fringes of the capital of the Garrotxa, Olot, where just that weekend they were having their annual town festival, les Festes del Tura.

Arriving at the garden

Les Cols has a book, Anima, which came out last year, written in Catalan, English and Spanish, simultaneously. It is the best book about food that I have ever read – a work of poetry and tender beauty, with pictures, recipes, writings by local academics and artists.

I am still ploughing through it, underlining key phrases as I go – I resisted for a while, but then I thought, I want this to be a book that I feel, that I interact with, digest. I chose a ‘2B’ leaded pencil to leave a more artistic mark, or so I think, on the pages.

In the book, writer Domenic Moli describes the Garrotxa as a “garden with colossal dimensions where holm oaks, beech trees, chestnut trees, walnut trees and elm trees … and a prolific family of bushes fill the spaces that man has not yet been able to domesticate”.

The September day we drove down the lane and through the woods to the garden, where we met the two agronomists, Guillem and David, who care for the plot and carry out the I&D into local varieties of produce. The sun was so strong that day that my usual 1/60 shutter speed was pushed up to 1/4,000. We are in the middle of nowhere, just nature.

On my return to London, a little girl on the underground was passing her father the peal of her satsuma, piece by piece. Each time she said, “rubbish”. Oh, this struck me in my heart. Satsuma peel is not rubbish; it can be used to help other plants grow in the cycle of nature.

At Les Cols, as much as possible is recycled – coffee grounds and leftover vegetable matter go into the compost, and the old bread is fed to the sheep. The compost is then fed back into the soil structure.

Guillem and David are always experimenting. Below, corks are used to help mulch the soil. I do this at home, but with a more spiritual purpose. I put the corks from wine bottles shared with people I love in the compost bin, and then the corks surface unexpectedly in the garden, bringing back fond memories.

David shows us a local variety of pepper. Wow, that sun was so, so strong!

To help keep the ground fertile, the homemade hen coup – the same width as the vegetable beds – is moved around the garden.  The cockerel, called Anton, if I remember correctly, was crowing away when we were there, despite the midday sun.

Guillem shows us the local variety of maize. It was not doing too well, as the badgers come along at night and bend the stalks to reach the cobs. Self-sufficiency is not always plain sailing.

A fungi that grows on the maize. Is it edible?  The gardeners believed the answer lies among chefs in Latin America. Does anyone know? Central?

Wildflowers among the vegetables, with lots of butterflies and bees – and other insects, which can be seen in the main image. The gardeners have added clover to the paths, to help feed the soil.

Buckwheat – symbolic of the Garrotxa

Fajol in Catalan or buckwheat in English is symbolic with Les Cols.

The Garrotxa is the only place in Spain where buckwheat, with its star-like flowers and heart-shaped leaves, grows. For so long it was a “victim of trends and the invasions [sic] of other food products”. It has now become a fashionable food among the gluten and wheat-free crowd.

Traditionally, the people of the Garrotxa made porridge out of buckwheat flour. They used to cook the flour in a large pot of boiling water with a pinch of salt. They then stirred the mixture until it was the right consistency and poured it into a mould. Once cooled, it has the consistency of crème caramel. It is then turned out, sliced, fried and served with a drizzle of sugar or honey.

Here is Les Cols’ buckwheat mill, which uses water from the spring: 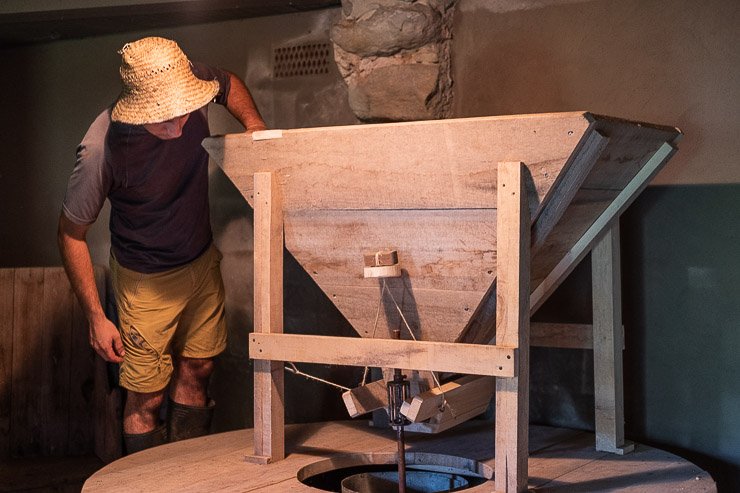 Arriving at the vegetable garden and looking up at Casa Horitzó is like coming across an Aztec temple in the middle of the jungle. The house is designed by local, Pritzker Prize-winning RCR Arquitectes, whose founders went to school with Fina. The house overlooks the vegetable garden, with fields of buckwheat and maize on the other side.

The stove at Casa Horitzó…

The dining table at Casa Horitzó, half inside, half outside, with a view across the flowering buckwheat and towards the hills and a Romanesque church among the trees.

Already we had spent two hours at the vegetable garden; so much to see, so much to discover. It was time to go and eat… or rather to revel in the Les Cols’ experience.

The Garrotxa is in the province of Girona, which also includes the Costa Brava. My dream to visit Les Cols became a reality this September thanks to the Patronat de Tourisme Costa Brava Girona. I was introduced to the Patronat by Mrs O Around the World.

You may be interested in other blog posts from my trip to Girona this September: