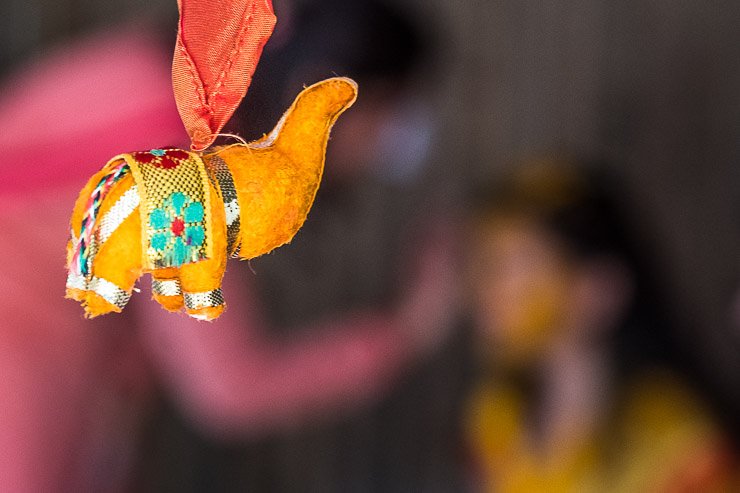 I went to Mauritius for a wedding in July. A family wedding held in the middle of a tropical forest near the town of Flic en Flac, on the west coast of the island – the coast where you can see the sun setting over the Indian Ocean.

The wedding reflected the melting pot that is Mauritius today; an exotic blend of Indian, African, European and Chinese cultures.

In Mauritius, the locals buy baguettes (French), drive on the left (British), eat boulettes – dumplings (Chinese) and samosas (Indian), and dance to the rhythm of sega music (Africa). I’ve only seen such a cultural mix once before – in Brazil.

The wedding was held in an open-sided wooden-beamed building. The forest was all around and above were the stars, and at times the rain clouds. A whole deer was roasting on the spit under a tree.  July is winter in Mauritius, and it is not meant to rain so much, especially on the western coast, but it did. Rain is not enough to dampen wedding spirits. 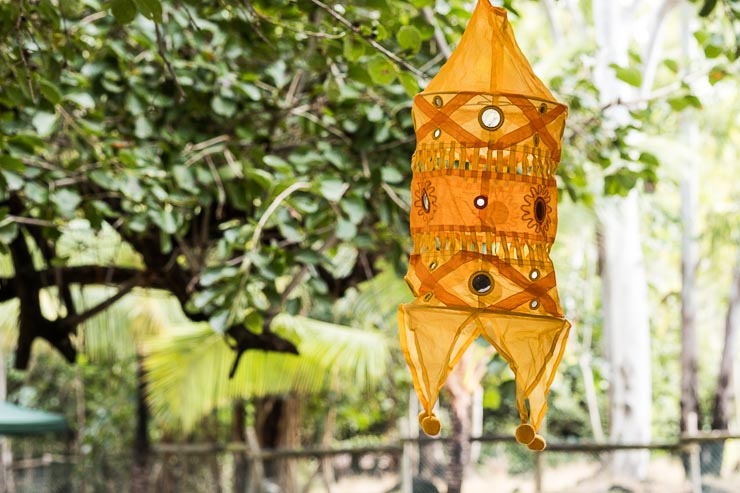 To attend a Mauritian wedding is the ultimate privilege in getting to know the local people and culture.

Mauritius is a mere speck in the Indian Ocean compared with its neighbour Madagascar. The Dutch were the first inhabitants of the island, arriving in the 1600s. Then came the French, followed by the British, until independence 50 years ago, in 1968.

No-one lived on Mauritius when the first Arab traders arrived. Only wildlife, including the dodo. The island is now a microcosm of how different cultures can live in harmony and respect for each other. Or at least that was the feeling I came away with. We, as global citizens, have a lot to learn from Mauritius.

They speak Mauritian Creole among themselves. They learn French and English at school, as well as the language of their particular culture, whether Hindi, Urdu or Hakka (spoken by the Han Chinese), to name a few.

I couldn’t understand a word of Creole, yet ‘goodbye’ is orewar and ‘yes, a little’ is wi, enn tigit.

The henna ceremony – the day before

The wedding was a Hindu wedding, a vedic wedding, they told me. The day before the wedding we were invited to the mehendi or henna ceremony. It was a brilliant way of getting to know the other guests, and to catch up with the bride and bridegroom.

Anyone who wanted to have their hands hennaed did so. The bride’s hands and feed were almost completely covered. I went for a very simple pattern. No men came forward. The henna dries, and the crusty black bits fall off to reveal the more easily recognisable reddish brown of a hennaed hand.

The henna ceremony was a casual event, with the main focus being on the Indian lunch. I had the best fish curry ever, and I know about fish curry, as this was my staple diet when visiting Sri Lanka.

The bride’s hands just after being hennaed 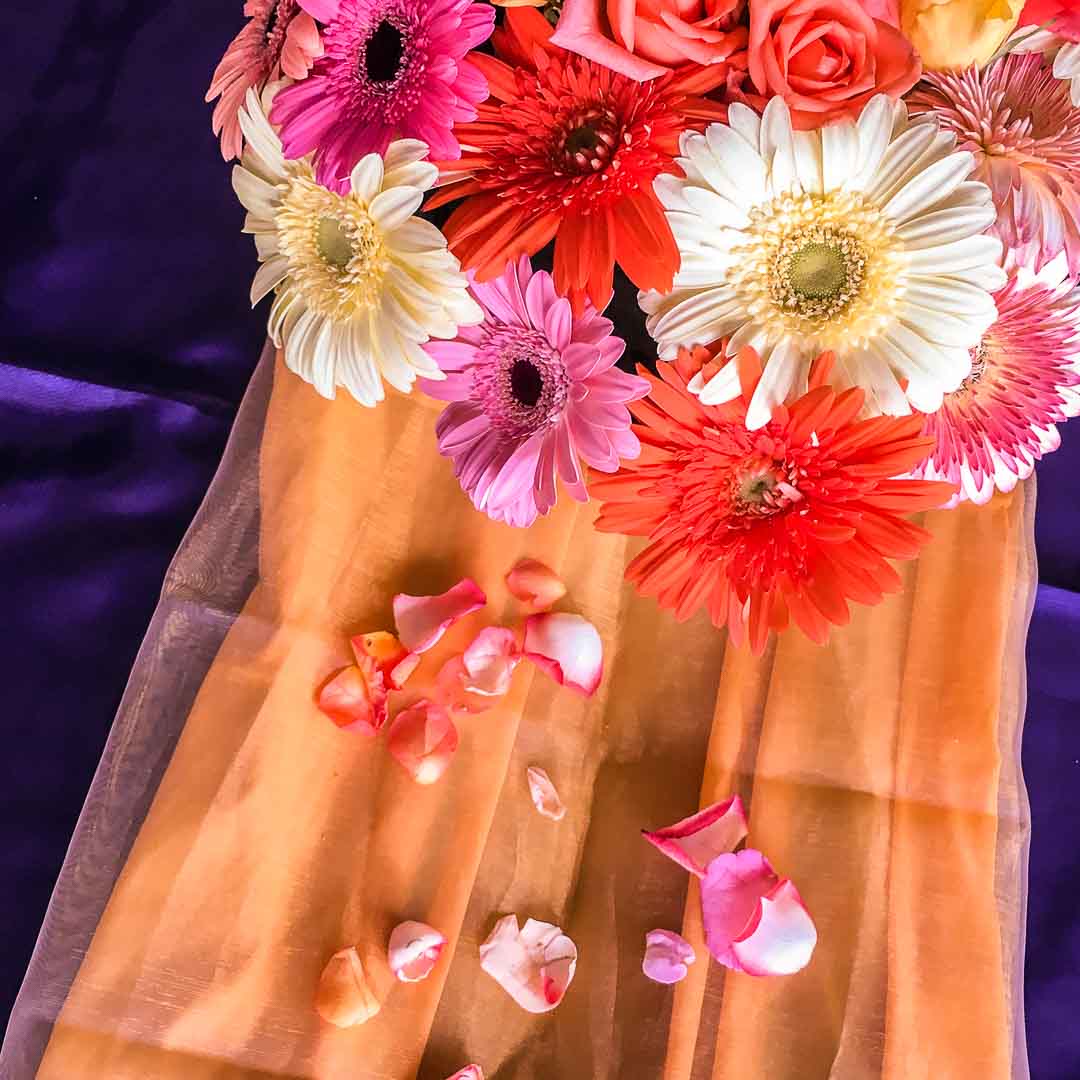 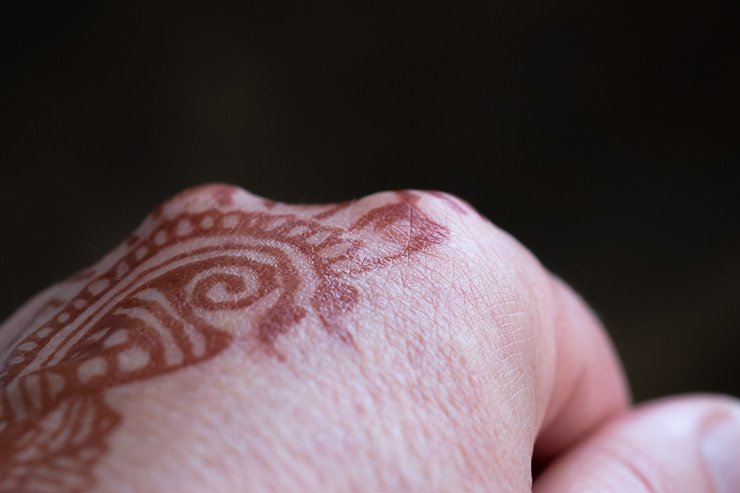 The next morning turmeric ceremony

The haldi or turmeric ceremony took place on the morning of the wedding. The married women plastered the bride with a ceremonial turmeric paste, either with a small brush of twigs or with their hands, much to the uproar of the onlooking guests. Then the married men did the same to the bridegroom.

Most of the guests ended up getting covered with turmeric paste. I panicked as to how to wash it out. The trick, the bridegroom’s mother told me, was to wash the garment and then lay it out to dry on the grass in direct sunlight.  I managed to avoid it going on my clothes. It went only on my face. My son wasn’t so lucky. He was wearing his best shirt, a little number by British designer Peter Werth. 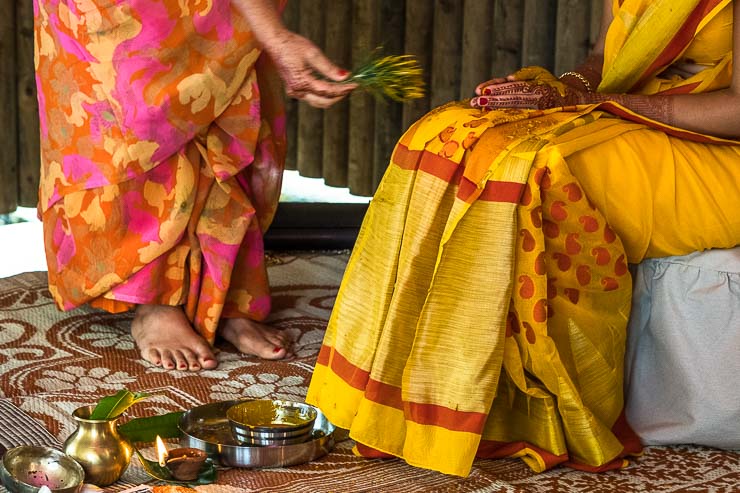 A married woman puts turmeric paste on the bridegroom as part of the haldi ceremony. 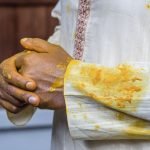 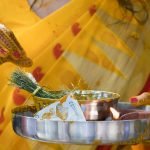 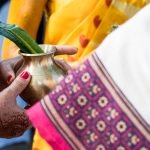 A vegetarian lunch followed the haldi ceremony. We were served seven different types of curry served on a banana leaf  – as chosen by the bride’s mother who lives in Agadez, in Niger. I was in my element. I love to eat with my fingers as it ensures the food is the perfect temperature. And I have NEVER eaten such tasty and satisfying vegetarian food. 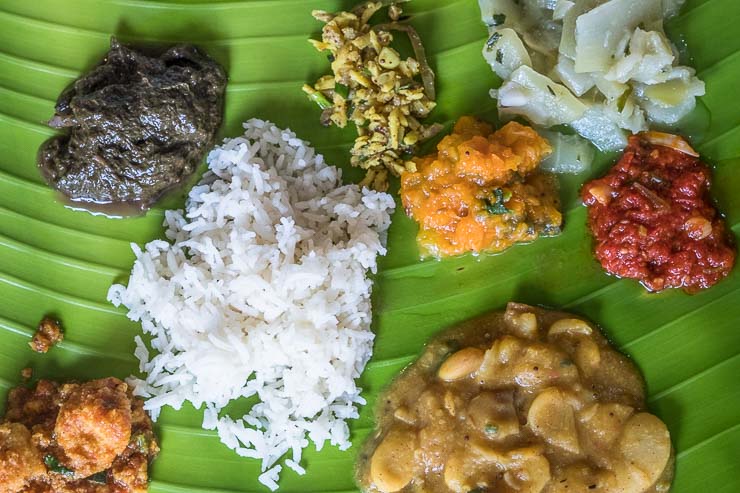 After a little afternoon siesta – for me it was a swim in the sea – the traditional wedding ceremony started at 4pm. It lasted for an hour and was made up of 18 different steps with various blessings by the ever-present burning fire  … on several occasions I feared for the saris catching fire.

It was a very ‘wise’ ceremony. One of the wisdom’s I nerdishly jotted down on my iPhone were the 7 vows. A marriage, said the vows, should be fulfilled in terms of:

The Christian wedding vows, by comparison, are about duty and obedience, to ‘have’ and ‘hold’ each other whatever happens in life. I know which vows are more meaningful to me.

By the time the ceremony was over and the celebrations were beginning, night had begun to descend. There was champagne, wine and a huge Indian buffet dinner, including the barbecued venison.

The wedding cake had a French touch: a croquembouche of little choux balls filled with cream, pilled high in a cone  and laced with dribbles of icing. Luckily the British tradition of speeches by the best man was not included.

Before dinner had begun, we had enjoyed sega music in the courtyard, the music of Mauritius and named the blues of the Indian Ocean.

The small group of musicians at the wedding were playing guitars, a steel drum and a harmonica, rather than the traditional ravanne (a drum made of goat’s skin and heated before playing), the triangle and the maravanne (a rectangular board made out of sugar cane tubes filled with seeds). However, the characteristic rhythm was still there.

That same sega beat carried on till the early hours of the morning as the DJ replaced the band’s music with a mixing of rhythms from across Africa, Latin America and the world.

“[Mauritius] will bear its soul willingly if you will [sic] handle it with care”, it reads.