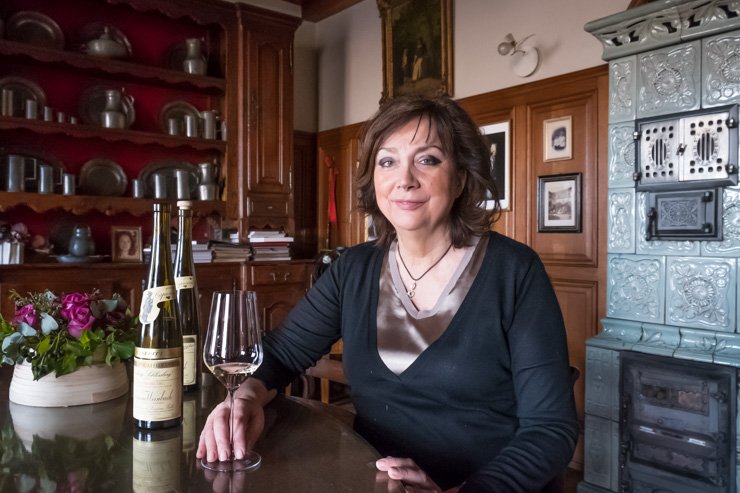 It’s all about style at Domaine Weinbach, a family-run domaine in the Kaysersberg valley of Alsace, in the foothills of the Vosges mountains. The Weinbach style is found in the richness of the oak-wood panelling in the reception room, the dusty rose pink flowers on the table, the wrought iron patterns of the main gate, the light yellow & gold wine labels with their characteristic typographic swirls… and we haven’t even got to the wines yet.

Built by Capuchin monks in 1612, Domaine Weinbach has been in the Faller family since 1898, when Alsace was part of Germany. For nearly 40 years it was in the hands of Colette Faller and her two daughters, Catherine and Laurence. Since 2015 Catherine has led the Domaine together with her son Théo. That for me explains the style – it’s a fluid, flowing, feminine style that captivates the heart.

The house sits in the heart of the Clos de Capucin, an original 9th century walled vineyard at the foot of the Schlossberg hill, where Weinbach produces the Riesling grapes for its Grand Cru Schlossberg, one of its 3 Grand Crus.

Weinbach – all about bio

With 30 hectares of vineyards, Domaine Weinbach is around 3 x the average size of a wine producer in Alsace. All production is biodynamic, one up on the environmental scale from organic. In a nutshell, it’s about working with nature, not against, and interfering as little as possible.

This, in return, produces a superior wine, say advocates, offering a greater reflection of the soils in which the grapes are grown; a wine that’s about terroir, a sense of place. The downside is that harvests are much lower and more labour is needed. It’s worth it, I, and many others, would say.

I was visiting Domaine Weinbach with Clos Driver Wine Tours, as part of a three-day and two-night wine tour along the Alsace Wine Route. All the producers we visited – and you can see the list in my blog on Strasbourg – embraced biodynamic production.

Alsace wines are about gastronomy. I was told this repeatedly. I would go one step further and say there’s an Alsace wine for every occasion. Wine is a culture here, not just a drink.

Within 3km of Domaine Weinbach, there are 4 Michelin stars: 2 stars at 64° Le Restaurant at the Hotel Chambard (blog to follow), and one each at L’Alchemille and Restaurant Julien Binz.

If you take the Upper Rhine Valley, which spreads into Germany and Switzerland, there are 70 Michelin-starred restaurants in the area.

Our first wine to taste that afternoon was the Sylvaner Réserve. I could quaff this quite easily as an aperitif, with a bit of jambon cru. Sylvaner is one of the 7 classic white wine varieties found in Alsace. It’s usually drunk young and fresh, or used as a blend with another traditional grape to the region, Auxerrois.

The other 5 varieties are: Riesling (the most famous in Alsace), Gewürtztramminer (second most famous), Pinot Gris, Muscat and Pinot Blanc, together with Pinot Noir for reds.

Weinbach produces around 25 cuvées, or types of wine, for each vintage, or year. They only use their own grapes. I had liked the first wine, and then they just got better.

We worked our way through some of the Domaine’s Rieslings, Gewürtztraminers & Pinot Gris, including the Domaine’s Grand Crus, wines produced from vineyards officially classified as the best.

We culminated with a Pinot Gris Sélection de Grains Nobles 2009, picked even later than the Vendange Tardive, to give a higher sugar level. The taste was pure liquid tarte tatin.  Perfectly balanced; not too sweet.

A bottle for home

I went home with a bottle of Gewürtztraminer Altenbourg 2015. My 21-year-old son, who knows his wines, proclaimed it the best white wine he’d ever tasted. I served it with a spicy lentil and tomato soup – Gewürtztraminer goes well with anything spicy.

The Gewürtztraminer grape is a “moment of elegance with a baroque start and a gothic finish“, Catherine recounted to the Wall Street Journal last September. Next time, I’ll bring back a Grand Cru to open my son’s eyes even wider, and I’ll visit the Domaine in summer, when the roses are out.

For my other posts on Alsace & wine: