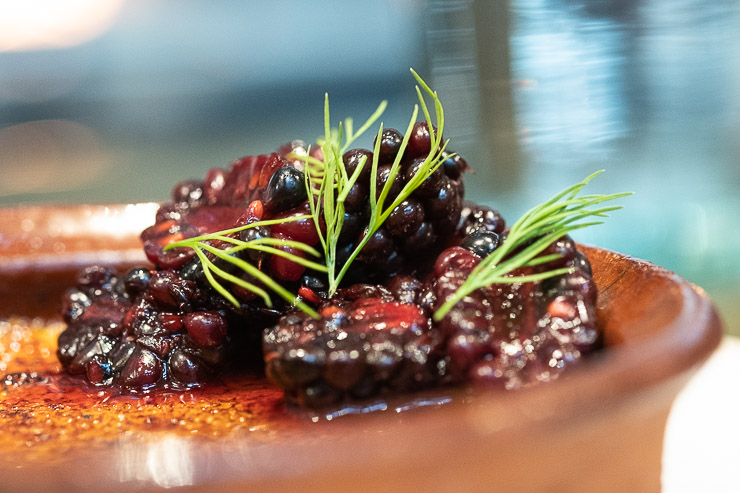 My lunchtime visit to the newly opened Wild by Tart in Ecclestone Yards, near Victoria station, sparked warm memories of holidays in the wilderness, trips to the English countryside and trekking along the windy Atlantic coast of Morocco.

Nigerian writer Biyi Bandele captures the power of memories, and memory, in his words: “Memory heals. It regenerates. It is an affirming god, a transcendent guide in the ritual of continuity.”

Sometimes a life pinned to a screen is a life empty of those healing memories, so it was good for me to pass a lunchtime in a place that was curated in a way that reflected the life that I have led. Or was it the life that I would have liked to have led? Ah, never let reality get in the way of dreams, or memories!

Wild by Tart is a place born of feminine power and creativity. It is the realised dream of Jemima Jones and Lucy Carr-Ellison, the duo behind Tart, the caterer, who feeds the fashion crowd while they work, from Kate Moss to Cara Delevigne, with food made from seasonal and sustainably sourced produce. The fashion crowd hangs out at Wild by Tart as wellm with Chanel having already held a function between the pillars and under the glass roof.

Jemima and Lucy both have fashion backgrounds – and both are wispily stylish, with accents that I have not heard since my son’s days at boarding school in Dorset. Their roots are in the British countryside, among the patchwork fields and marshes of Somerset and the wilds of Northumberland, a touch of which they bring to Wild by Tart.

Wild by Tart: It’s all in the name

For me, ‘wild’ is about my childhood roaming the heathlands of the New Forest. It’s earthy, very earthy, if not peaty and dark.

And ‘tart’, well I would love to be a (stylish) tart, the ultimate in feminine power. I also like to eat things that taste tart – from lemons, and gooseberries to jars of pickles; and a good homemade raspberry jam tart always goes down well with a cup of strong English breakfast tea.

So what is Wild by Tart? It is a restaurant, with a long bar, open kitchen – with wood oven and grill, and high ceilings, lush green plants and enough glass to almost be a glasshouse. Once it was a power station, and provided the power for Buckingham Palace, the royal residence.

Leading off the restaurant space, and opening onto Ecclestone Place, is the Wild by Tart deli , where I bought some honey from Northumbria. On the other side, is the store, selling all sorts of goodies that Jemima and Lucy have unearthed from their travels, from Majorcan ceramics to handwoven Turkish throws …. and lots of lush, tropical plants, for indoors.

In the fourth space, behind the mirrored wall at the end of the bar is a photo studio, while events organised by the likes of Chanel have spilled out over the entire space.

With fashion in their veins, Jemima and Lucy have dressed the waiters in cobalt blue shirts made by London-based Fitz & Fro in factories in the hills above the Portuguese city of Porto. These are the only collared shirts made by Fitz & Fro, who specialise in collarless shirts, I was told.

The front of house wears a sandy-pink striped jump suit and the maitre d’ a white and mint-striped shirt. And, yes, you can buy both in the store! Woven by hand in Morocco!

What I ate & drank at Wild By Tart

The food is a journey. The wood-fired grill was blazing; the wood oven at the ready, and the puddings deliciously indulgent.

As always, I asked for a natural wine. Lucy recommended a Slovakian wine, an orange wine, turned orange by leaving on the skins. It was from Slobodné vineyard in Hlohovec, about an hours’ drive east of Bratislava in Slovakia, and the story of the vineyard is historically fascinating, with the family only claiming back their lands in the 1990s, with the passing of the Communist regime.

Devonshire crab, buttermilk, fennel & tarragon oil … (bringing back memories of childhood holidays in Devon). I also had a slice of Wild by Tart-made sunflower soda bread to mop up that deliciously tarty sauce. The bread comes with Marmite-blended butter. My mother brought me up on Marmite. I tried it. Was I convinced? I preferred the sauce. No longer would I ever put Marmite in my store cupboard.

Sticky octopus, preserved lemon, yoghurt & pickled saffron chilli, cooked on the open grill (memories of eating seafood on the quay in Galicia, while preserved lemons, yoghurt and saffron is full of tastes of the Eastern Mediterranean) …

What I want to eat next time