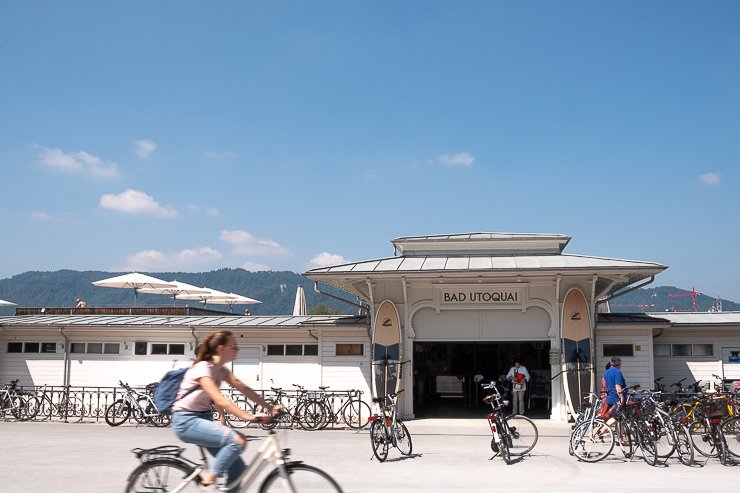 20 Sep Zurich: quality of life by the lake

When things go shaky, I seek the comfort of order and structure; and where better to find this than in clean, green Zurich.

This largest of Swiss cities straddles two rivers – the Limmat and the Stihl – with newer neighbourhoods then wrapping down either side of Lake Zurich.

Zurich is ranked as one of the world’s top cities for quality of life by Monocle magazine. Two years ago, I was in Zurich for the annual Monocle Quality of Life Conference. This year, in 2020, I revisited the city before heading to St Moritz for The Chiefs Conference by Monocle.

Some notes on Zurich

Zurich is the city with the world’s strongest purchasing power, after Los Angeles. The two first things that struck me were the sound of sparrows and the fleets of bicycles, many with little children sitting snuggly in trailers behind.

The Swiss are among the world’s most innovative and entrepreneurial people. This spirit has helped launch the likes of Vitra furniture (on my wish list – a Vitra chair for my home office) and, more recently, running brand On Running (try the fourth floor of Jelmoli department store near the main station).

Zurich is also the birthplace of Dadaism (think Man Ray and Marcel Duchamp, even though they aren’t Swiss), an art movement started around the time of the First World War.  As curator Gianni Jetzer of Hauser & Wirth said: “The milieu of an overly rationalised Swiss society proved a breeding ground for an avant-garde defined by humour, nonsense and subjective realities.”

The view across the river Limmat towards Fraumünster, one of Zurich’s four main churches.

Forget taxis, travelling round Zurich by public transport is a delight.  All it takes is a 24-hour pass, bought at any bus, tram or train stop with a credit card for SFr8.80 – the same price in 2020 as it was in 2018.  Make sure to download the ZVV Timetable app. The trip by train from the airport is just 15 minutes.

A swim in the lake

Perfect for recharging – a morning dip in Lake Zurich at the wooden-slatted Bad Utoquai (see featured image) in the district of Seefeld. If you swim beyond the yellow buoys, you’re advised to wear a fluorescent cap, to be easily picked out by passing boats.

The men’s changing area is to the left and the women’s to the right. I got it wrong first time round (I had taken off my glasses), but that is another story. You will need a SFr2 coin to leave your valuables in a locker.

After the swim, how about breakfast at the Monocle Café – designed by Swiss architects MACH. The café offers some of the best coffee and Bircher muesli in town, as well as much more.  The outdoor tables are a great place to quietly watch the world go by. Also home to the Zurich studio of Radio Monocle24.

Zurich loves art. The city has around 1,300 public art installations and more private art collectors than anywhere else in the world.

The extension of the Kunsthaus public art museum is due to open next year. Designed by David Chipperfield Architects, it will house several legacy private collections, and is set to be a a new attraction for lovers of French art.

When I arrived at Zurich Main Station in 2018, Fondation Beyeler (one of the names behind Art Basel) was putting up the temporary installation of the GaiaMotherTree by Brazilian artist Ernesto Neto.

If you are in the Zurich-West district, don’t miss Hauser & Wirth’s Zurich gallery in the old Löwenbräu brewery building. A 20-minute walk from Hauser & Wirth, Frau Gerolds Garten has transformed an industrial wasteland into a vibrant outdoor area.

The urban garden provides edible plants and flowers for the restaurant. In winter, the garden hosts Zurich’s largest Christmas market. Near the entrance is the Freitag ‘bag’ Tower,

John Baker is for me the best bakery in Zurich. On my first visit, I ordered an apricot tart at the John Baker in Helvetia Square, where there was a demonstration going on that morning. (Switzerland is one of the world’s few true democracies.)

And then during my recent visit, I bought a cinnamon bun, and olive bread & salad for lunch at the other John Baker, near the Opera House. Both places have chairs and tables for sitting outside.

I am a lover of natural wine. My body cannot cope with anything not natural. But natural wine also has to be good wine. Through the ZVV app on my phone, I navigated late one evening to Gamper Bar, in the heart of the red-light district. No need to fear as Zurich is a safe town.

Gamper Bar is on a street corner, with big open windows and seating wrapped round the outside. I went for a glass of Klettgau AOC (based on the Swiss white grape variety Müller-Thurgau) by Markus Ruch. Take note: good Swiss wine is often hard to find outside Switzerland as they keep it for themselves. A producer for next time is Erich Meier.

I had wanted to eat at the Gamper Restaurant in the same street, but it was Tuesday and it was closed. The very friendly waiter at the bar – so refreshing to find a person with a smile working in natural wine – delicately explained to me that their approach was regional, and that the artichokes came from Italy, but the Tête de Moine (monk’s head) cheese and Salmetti von Zanetti sausage were Swiss.

For champagne lovers, the list was impressive. The names I knew from my tours of Champagne included Olivier Horiot, and Charles Dufour, Marie-Courtin and Chartogne-Taillet.

Lady’s First Hotel, and it’s not just for ladies. I loved this place, for its squeaky wooden staircase, warm service, the well-matched colours, its closeness to swimming at Bad Utoquai, and the rooftop terrace and rose garden. I also needed somewhere small & quiet in the elegant district of Seefeld. For a more animated district, just by the main station, head to 25hours Hotel – that is where I want to stay next time.

We often want what we don’t have. I want to live in ordered Zurich, while a Zürcher was telling me how he craved chaotic London.  Maybe because there are two sides to all aspects of life, and we need both sides to live in harmony.

A key thing I learnt from both Monocle conferences was the importance of dialogue, forgiveness and compromise in our polarised world. So for all of you who prefer chaotic cities to the good governance of Zurich, I accept what you think and I forgive you, and hopefully you will accept and forgive me too.

Places for next time

Restaurant Kle and its sister restaurant Restaurant Dax, which opened off the northern end of Langstrasse in 2021. Plant based, Founded by Zineb Hattab.

This post is an update of the original one on Zurich first posted July 2018. You can also read about my visit to Fotostiftung Schweiz, the Swiss photo museum, in 2018, in the town of Winterthur, 20 minutes by train from Zurich.